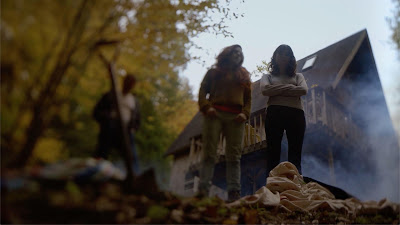 Five friends go on a vacation and find that they can't leave. If they try to walk away they can only get so far before they snap back and appear in the house. While the food they placed in the fridge when they arrived replaces itself every time they open the door, things like toothpaste, tampons and toilet paper are not. Tempers flare as everyone finds that there is only so long they stand each other.

How you like this film is going to be determined entirely by how you react to the very deliberate pacing. Moving at a very slow pace for  much of the first hour it can seem maddeningly. Why doesn't the film get on with it? But its the same question that the characters experience as they are stuck reliving the day over and over again. It's a gambit that is supposed to simulated being stuck with everyone for a very long period of time. I'm not going to guess whether it will work for you or not, I'm only putting it out there.

In the third act things get interesting as madness takes over. Its an interesting turn of events with a twist I didn't quite expect.

To be certain there are some things left unexplained like how did  they find out about  the cabin? And some weird didn't you realize there is a big mistake such as an early BBQ where the grill is clearly not lit, but for the most part this is a well done little time passer that is worth a look.