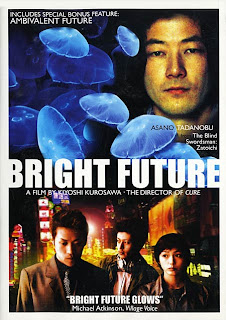 With BRIGHT FUTURE playing Metrograph's Virtual Theater starting Friday, here is my review from the very early days of UnseenFilms
Bright Future is a film most people I know remember because of the image of a jellyfish in an aquarium. It’s the image that made me curious about the movie; I wanted to know what was the movie that went with that image.

The film by Kiyoshi Kurosawa concerns two friends working at a low level seemingly dead end job. One of them is slowly acclimating a jellyfish from salt water to fresh. He hopes to release it into the wild. When a burst of rage causes one of the pair to murder their boss, the remaining friend is left to pick up the pieces and try and work out the what's and whys of it all.

This is a change-of-pace of sorts from Kurosawa who had been making more or less genre films (Pulse, Sweet Home, the Revenge films). While the director’s films grew more and more thoughtful over time, I think this was kind of the moment where he broke the shackles of having to work within some sort of genre designation. I think this when he said to the world "I’m going to do what ever I want to do."

I’m a fan of Kurosawa’s. I’ve seen a good number of his films, and he always manages to surprise me in some way. His storytelling style is such that his films don’t do what you think they are going to do. They also seem to be much heavier than you expect them to be. Rarely is he simply telling you a story; he’s always throwing something in the mix to make you go hmmmm...(The Revenge films, or the second one, being the exception)

Here in Bright Future it’s the same thing. Nominally the story of two friends and the aftermath of a murder that one commits, the film spirals out into an examination of life, our place in it, and how just knowing someone will influence what we do after that point. It’s a heady mix that gives us pause.

I’m not sure it’s entirely successful. I think that the lack of genre structure kind of allows the film to get away from the director, with some bits seeming to wander all over the place. However at the same time the film covers ground that isn’t well worn and is surprising in its landscape.

I like the film a great deal, but its lack of a genre designation (it’s neither a crime film nor a horror film) makes it a tough sell for those expecting something along the lines of what went before. That really shouldn't matter to anyone just looking for a good film.

This film is highly recommended
Posted by Steve Kopian at December 01, 2020