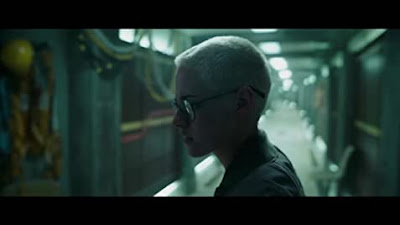 A super deep undersea drilling rig begins to break apart. Is it earthquakes or something else?

It's something else- there are underwater beasties tearing the place apart to get to the tasty humans inside.

Beginning as the rig begins to implode UNDERWATER grabs you and drags you along forcibly for about half it's running time. The sheer motion and uncertainty of what is going on is results in a film as tense  as anything I have seen in 2020. Yea it echoes other films like THE ABYSS and ALIEN, but at the same time it has it's own feel to it. You really won't care that it's like anything else you just want to know where it is going and how it comes out...

..and then things begin to go array. The film gets awfully dark and a bit hard to follow. Watching the film on HBO on Demand I repeated a couple of sequences because I had to really look at what I was seeing. As a result the momentum started t drain as I disengaged. I started to realize that whole chunks of the film doesn't make sense. I stopped being caught up in the events on screen and started to worry about the plot points they dropped by the wayside. I still wanted to see where it was going but I kind of understood why the other reviews of the film were fair at best.

Honestly I like this film over all. Yea I love the the first half, I just wish it had managed to maintain that high level of suspense.

Worth a look now that it is on HBO