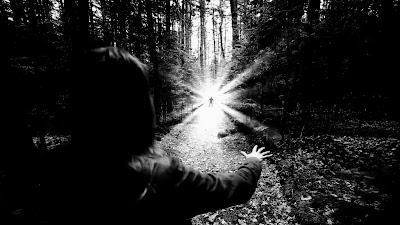 A doctor is worried about her granddaughter's health and she discovers that there is something supernatural going on around her. In desperation she goes to Central Park in the hope of finding some of her friends who maybe able to help.

While the film has some stunning images in it, the truth of the matter this film is a mess in so many different ways. The first thing you'll notice is the sound which seems t have been recorded in the camera so that all of the foreground sound overwhelms the background sounds. That may be fine during some sequences where everyone is front and center, but anything where people are away from the camera talks the sound gets lt. Its horrible early on when the granddaughter is front and center and characters are in the background since all we hear is the young girl as plot points get lost behind her.

The framing of sequences is not very good. Much of the film appear to have been shot with a VR headset in mind, many of the camera moves feel like we are in a VR game or film. Many sequences of dialog seem to have been shot with the actors no where near each other with the film cutting back and forth between them but never creating a sense that they were in the same place at the same time. This may have worked for Orson Welles but here it falls on it's face.

The performances are all over the place with some being better than others and some people better in one scene than others. The result is a whiplash effect that just destroys all believability...

...that is assuming the script actually worked. Then again the film is so technically deficient that I can't fairly tell if the story amounts to anything.

This is a huge miss.

Email ThisBlogThis!Share to TwitterShare to FacebookShare to Pinterest
Labels: Chain Film Festival 2020, horror, not worth the effort