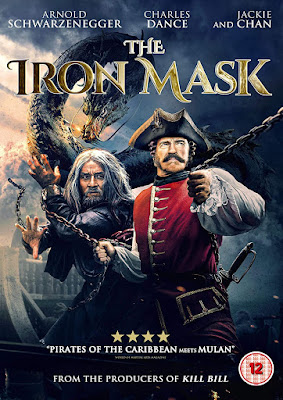 This is a sequel to 2014's VIY (aka Forbidden Empire)about a Jason Flemyng's Jonathan Green a cartographer who ended up in Tsarist Russia and took on a demon. It was loosely based on a classic Soviet horror film but refashioned as a crazy action film. I loved it.

This sequel refashions Chinese legends, Alexander Dumas' The Man in The Iron Mask and god knows what into a totally batshit crazy film that will become legendary for the epic throw down between Arnold Schwarzenegger and Jackie Chan. The plot has way too many plot threads to fully explain (especially since a good number are not resolved). Basically it has Flemyng's Green going to China because an imposter Tsar won't let him go back to Europe and wants him to map the country to the east. He is traveling with Jackie Chan's daughter who is a princess in disguise. She is hoping to get home to free the kingdom from someone pretending to be her. Meanwhile in England Jackie Chan is being held in the Tower of London by Arnold. Jackie is being held with two other prisoners, one of which is the man in the iron mask and is the real tsar.

You will be at times....but it won't matter because while the plot is a true mess the action sequences are pretty good and hold your interest. Actually the plot makes just enough sense that you are willing to go with it. Additionally everyone on screen seems to be having a good time and it bleeds off the screen. Yea the effects are not always the best but it strangely okay because it's all just so much fun. This isn't high art, but you won't care.

For me one of the plusses for me is that where normally the appearance of Arnold and Jackie in a film would be considered a come on, with them appearing in a single scene , the fact is that both of the actors are in the film for about a third of the run time. Yes they are largely off to themselves- and they do effect the plot- and they are what you will remember.

Is this worth seeing?

If you are willing to just go with it- absolutely.  This is just a nutsy film that just mashes everything together into a joyous mess.

Out on VOD and home video