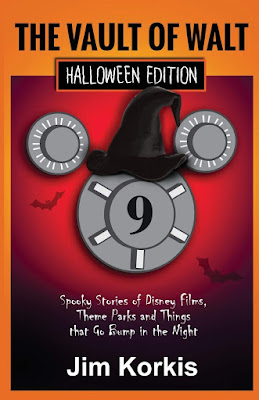 Sequel  to Jim Korkis' Vault of Walt Volume 7 highlighting Disney Christmas stories, this volume looks at Halloween films and attractions at Disney and it's one of the best in the series.

Anyone who has been reading Unseen Films knows I am a hue fan of Jim Korkis and his Vault of Walt series because they always manage to reveal stories I've never heard of before. Over the years I've handed off copies to Disney crazed fiends ho knew it all and they always are shocked at how much Korkis reveals that they didn't know.

This time out Korkis gives us looks at the making of films such as THE SKELETON DANCE, THE NGHTMARE BEFORE CHRISTMAS, HOCUS POCUS, as well as others. There is a discussion of the character of Witch Hazel who appeared in both Disney's TRICK OR TREAT and several Bugs Bunny cartoons, all voiced by June Foray, details on the Haunted Mansion, Bela Lugosi and more.

What truly is great about this book is that almost all, if not all, of the material is new. As Korkis tells it at the start the publisher came to him after the success of the Christmas volume and asked for something on Halloween. Korkis agreed and then ran into the problem that he couldn't borrow material  from his other books and articles, which meant he had to form the book from the ground up. This makes the book one of the best in the series simply because we haven't heard many of the stories before. The fact that Korkis borrows from himself is the only weakness in series, and that makes this a page turning delight as we wait to see what the next tale will be.

I love this book. Not only do I love the things he talks about I love the writing itself. For the first time in a long while Korkis' writing seems fresh. He isn't telling a story for the 12th time and as such he seems to be sitting on the edge of his seat to see how it will come out.

This book, like all the others in the series is highly recommended.