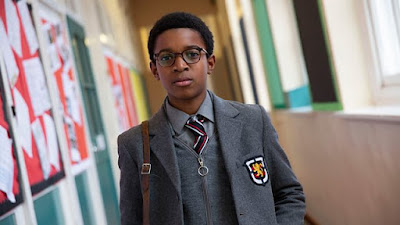 The final film in Steve McQueen's Small Axe Anthology is at times, more polemic than a narrative. However despite that the film brings together all of the Anthology's themes and ideas to end in a deeply moving finale.

The film is the story of 12 year old Kingsley who is sent from his school to one for kids with learning disabilities for disruptive behavior. The reality is that Kingsley can't read and  the school he was sent to is a warehouse where the kids are left to their own devises. However help is on the way when a group of West Indian women intercede and work to change the system.

Running just over an hour this film could easily be twice the length since the characters presented are so rich we would happily spend more time with them. I would have happily spent more time watching their lives and stories unfold before me. I also think that another hour would have taken the edge off the film's preachiness, the narrative stops for about a third of the running time and pushes the characters aside to lecture us about the state of the English schools and the racism in them. Its not that the information is bad, it's more that it is much too dry when compared to the bits that are dropped in during the narrative.

However quibble as I might about the preaching, EDUCATION still packs an emotional punch. As the the final minutes winds down I started to tear up. In beautifully done sequences we see the changes that an education brings.

It is also a fitting ending to the Small Axe Anthology since it forcefully ties up the Anthology's theme of the importance of community together since we see, honestly and truly see how a community can change lives.