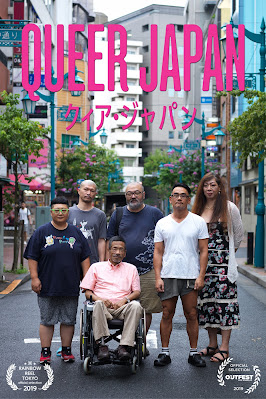 This is a look at being LGBTQ in Japan.

You will forgive me if I ramble a bit in talking about this film. I'm kind of uncertain about how to discuss the film.  It is not that that there is anything wrong with it. It is ultimately an excellent look at being queer in Japan. It high lights lots of really great people who tell their stories about being gay. It's so full of great people that I think the film is absolutely worth seeing. I'm just worried some people will take a look at the surface and walk away.

Please for give me if I get hung up on the presentation, it's only because I really like this film a great deal and think more people should see it beyond the one's who are going to see the crazy and go with that. The trouble is that it's the film is that it feels like it's a walk  down the gay side of otaku culture. Much of the film looks like a live action anime film. We have Gengoroh Tagame and his gay comics, Saebor's rubber performance art, the hentai party Department H,  and more all infused with multilevel eye popping graphics. It all looks wild and crazy, and while it's fun, I think some people are going to see it and dismiss it as just something that is crazy and Japanese...and they would be dead wrong to do so because this film is so full of really cool people you will just want to hang out with.

In many ways I love this film. It is so alive with people who have found their place and are enjoying it. The fact that they are happy with themselves speaks volumes to everyone, not just people in the LGBTQ community.

Highly recommended QUEER JAPAN is delight and a must see.