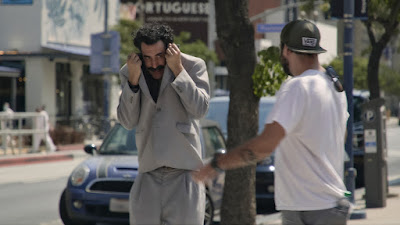 I was not a fan of the first Borat film. I thought Sacha Baron Cohen pushed things too much and the result was  it just didn't work. This time out I found I was laughing way more than I thought was possible by a Cohen film.

The plot of the film has Borat freed from a gulag in Kazakhstan in order to send a bribe to to Donald Trump. He is to bring a chimpanzee to Mike Pence. Unfortunately the chimp is killed and eaten by Borat's daughter who stowed away in the cage. This sends Borat on a mad dash to give his daughter to Pence instead.

Infamous for the footage of Rudy Giuliani trying to get it on with a girl he thought was 15 years old, this film works best when it is steering away from the stunt sequences. Say what you will the hidden camera sequences are still just a tad too much. Yea they are funny but still a bit too over the top and too long.

Ultimately my quibbles don't matter because the film is funny.