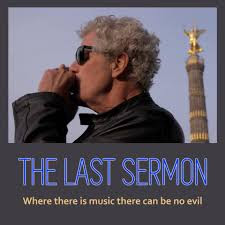 The Last Sermon is the story of Jack Baxter who was in a café in Tel Aviv making a documentary when a suicide bomber walked and blew himself up. He was severely injured and is still carrying the remnants of the blast with him both physically and psychologically. In an effort to understand why it happened and in an effort to find closure and start a dialog that he hopes will start to build bridges he returns to Israel to try to talk to people about what happened- including the family of the bomber.

If you think you know what this film is you are dead wrong. I had danced around seeing it until I kind of ended up cornered and I had to watch it. I schullfed down in my chair expecting to find the film going in all the expected ways and doing all the expected things. Instead Baxter and his friends don’t take the easy way out. They go to places most journalists never would and talk to people and ask them real and genuine questions that go beyond the cliché. The result is a film that makes you sit up and take notice. There are real answers to the important questions that other films and other filmmakers either fail to answer or do so incorrectly. The result is a film that opens up your heart and mind.

What makes the film work is Baxter isn’t looking for vengeance or a prepackaged answer, what he wants is a genuine answer. He wants to understand what happened and why. He wants  to know, way beyond the simple good/bad or black/white answers why the bombing happened and why people feel this is a viable thing to do. The result is a cathartic ending that gives us real hope and real understanding.

It is also a difficult film. I think one of the reasons this film isn’t being touted all over the place is that Baxter doesn’t care where his answers take him. It is not a film that gives pat answers that clear one side or another. It is a film that shows the complexity of the situation in Israel and it leaves everything murky….

…but also incredibly hopeful. This is a film that is full of hope simply in that it shows that there are people who are willing to really create a dialog and really discuss things and try to make a lasting and meaningful change based upon actually understand the Point of view of other people.

One of the most important films you will see all year.