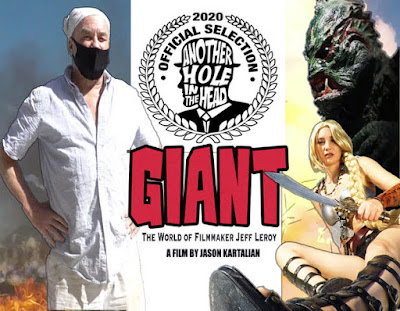 It is no secret that Jason Kartalian is one of my favorite directors. He has made features and shorts and has delighted me every time. More importantly he makes movies that make me fall in love with the movies all over again.

His latest film might be my favorite film that he's made. A documentary sequel to his earlier film GIANT WOMEN, MICRO-BUDGET, the film has Jason becoming a bit more involved in the cinematic world of director Jeff Leroy. Leroy makes ultra low budget films about genre subjects like giant women or Frankenstein or Dracula. They are not the greatest film ever made but they are made just for the love of making films. Leroy has to make the films and he has fun doing it and if you watch his films with that in mind you'll have fun.

GIANT picks up with Leroy shooting a sequel to his earlier Giantess film. Filming is headed in one direction when Leroy is gifted with a decaying reptile monster costume Seeing a chance to shoot his own giant monster film Leroy rethinks his film. Kartalian leaps into action to film the shooting of the battle.

While covering some of the same ground as GIANT WOMEN, in that we see Jeff Leroy making his film, GIANT scores over that earlier film because the focus is not on the man or the movie but the sheer fun one can have making a film. The film opens with Kartalian talking to us about getting caught up in this crazy world of filmmaking where friends come together to make a movie because they are having fun. From there it's a series of behind the scene sequences mixed with people talking about the fun of filmmaking. The result is joy bleeds off the screen an into our hearts. 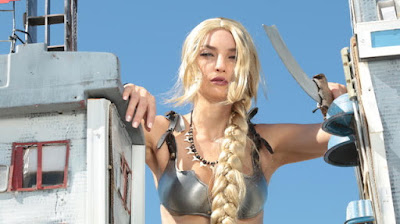 GIANT is one of the truly rare films that is about joy that manages to unconditionally share the joy that is up on the screen. You feel the love of making movies bleed out of the images. Its a film that reduces it all down from something intellectual, say "I need to tell a deep story" and makes it "I want to have fun with friends".  GIANT is fun is a bottle. It is a film that has made me smile every time I have watched it. It's also a film I have been trying to get my fun loving friends to see because they know a good thing when they see it.

To be honest I am certain that some people won't like it, and that they won't see filmmaking as something fun. I suspect that they are probably not the sort of people you wouldn't want to hang out with on a Saturday night. You know the dead inside people who rew up way too young and tell you to get off their lawn before picking up every last stray leaf and going to bed by 9PM.

I apologize if I'm not going into great detail about the film and the hows and whys, but that isn't what this film is. As I said above, this isn't an intellectual film, this isn't a film you discuss, more this is a film that you feel. It's like the films you call your favorites, you know the ones you watch over and over again because they make you FEEL something wondrous.  GIANT is that sort of film. It makes you feel something wondrous about film, about the movies. It brings you back to when you were a kid and you fell in love with the flickering image. You know the point when you saw movies as something cool and magical and  you said you wanted to make movies because it had to be fun? GIANT will let you know that you were right movie making is fun- you just have to be willing to feel it like Jeff Leroy and all his friends.

GIANT have its world premiere at the 17th annual Another Hole in the Head Film Festival running online this year from December 11 to the 27th. Tickets and more information go here. 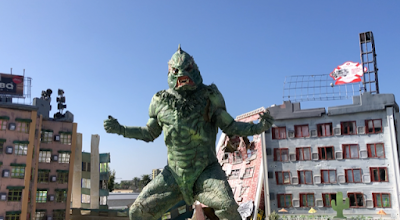 Email ThisBlogThis!Share to TwitterShare to FacebookShare to Pinterest
Labels: Another Hole In The Head Film Festival, documentary, film on film, jason kartalian, short