Interview with Alex Svenson of Then Comes Silence 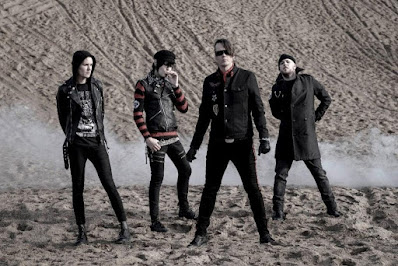 In March 2020 I reviewed the album “Machine” by Post Punk heroes, Then Comes Silence. The band hails from Stockholm, Sweden and have had quite the success on the European music charts. I recently had the opportunity to speak with the bands founder, Alex Svenson to discuss life as a musician in 2020. To read my review of their latest album, Go here.

LM: Covid 19 has affected musicians worldwide. Bands have had to improvise and be creative when it comes to releasing new music. How has the pandemic changed you as an artist?

AS: This pandemic affected everyone, every artist with big plans for 2020, small or big. That's the only consolation we had. We're in it together. The band realized during that same week we released 'Machine', that it was going to change most of our plans for this year. It later changed to... "all plans this year". It was when the Summer festivals started to email about postponing til 2021 that we had to accept the fact for good.

Necessity is the mother of invention. We needed to find other ways to reach out, promote the album and keep communicating with our friends, fans and followers. I think it began quite early when we among other artists started to make quarantine versions of songs and post them on social media. This was something new to all of us. In our community, the online events suddenly popped up one by one. Gothicat Festival was one of the first and in my opinion the leading one in these trying times.

The concept of live stream was new. We didn't want to just film a live set in our practice space using a phone with crappy sound. We decided that if we were going to do a live stream it had to be with a professional team. Gear, camera men, a sound engineer and assistants. We put our trust in donations to cover the expenses, and it worked higher than our expectations.

LM: Live stream concerts have become the go to way to connect with fans from all over the world. This approach allows more people to see you play while removing the live concert experience. What is the thing you miss most about performing in front of a live audience?

AS: I miss everything about live shows. Sure, a live stream is better than nothing, but it's hardly the same thing in an empty room with a couple of cameras and wifi. It's stressful and confusing. Totally new to us. Some might say it's just like a live TV performance. I have done a couple of them in my music career and it's not the same at all. A live stream is more fragile. It's self produced and there's no backup if something goes wrong. I miss the noisiness, the sweat, the stage, the preparations backstage, the travelling and meeting new people.

LM: Your latest album "Machine" was released in March 2020 just before the global pandemic. The sixth track "Apocalypse Flare" seems quite fitting during this unprecedented event. Does this song have a different meaning to you now than when you had written it?

AS: No, the meaning of the song is still the same and I don't feel it's any different now when we're living in a time where we will have to face the consequences of ignorance and negligence. That's what the song is about. We all know it's heading somewhere bad. Tomorrow could be worse than today, but we still want to find that nice spot at the beach and enjoy the sun while it's still there.

LM: The soundtrack to any film is quite important. If you had the chance to have your music featured in any film which film would you choose and why?

AS: There was an Italian low budget horror film that asked permission to use a song. That was before the virus took over everything. We haven't heard what happened since then.

I know we'd love to have our music featured in any kind of film actually. Even more so... we'd like to do the whole soundtrack if someone asks us. I have worked with film scores and theatre play music before.

LM: The writing process for each artist is so different. Out of all the music you've written which song did you find the easiest to write, and which was the most difficult?

AS: Some songs were written in a day like, 'Strangers' and 'We Lose The Night'. There are always some songs that require more time. I was saving the riff for ‘Strange Kicks' for some time before it became a song. It didn't fit anywhere until some other chords mixed well together with the rest. That's quite common. You have short little melodies that you save for a better day. 'Kill It' took some time I remember.

LM: When did you first realize you wanted to be a musician and what was the first song you ever wrote?

AS: I have always known I was going to work with art in some way. I have been drawing and painting since young toddler days. I discovered music quite late. I was about fourteen and one of my influential friends showed me the world of synth and electronic music. I bought a second hand Moog synthesizer and started writing simple Synthpop. I don't remember my first song. It was probably not good.

LM: What inspires you as an artist and are there any hidden meanings behind your songs or albums?

AS: Everything inspires me. Watching, listening to and studying other people. That means some serious eavesdropping of course. Movies are a great influence. I'm a gemini, I don't read books that often. I'm easily distracted. Films, audio and images give me the information more quickly and it definitely works better for me. I envy people that enjoy reading a book. It looks so peaceful. There is always something hidden in music. It's an abstract way of expression and that gives you so many possibilities and so much freedom. That makes music so interesting and powerful. I hide stuff all the time.

LM: Despite the strange events that have occurred this year TCS have managed to gain a lot of new fans. I'm sure this is both exciting and unexpected. Is there anything you would like to say to your fans?

AS: The music community, whether it's mostly Goth, Post-Punk, Metal, Industrial or Darkwave for some of us... it has been one of... if not the most important saviour this year. It feels like I have gained so many new friendships. It feels like I know so many of the faces I see almost everyday on social media. We have been supportive to one another. It probably would been unbearable without the contact of other people online.

Everything was soaked in the pandemic, poisoned in politics and affected by the climate change. Words like "postponed", "cancelled", "quarantine", "racist" and "lockdown" make me want to throw up.

There were some really dark days, sad moments, stressful times with a high level of anxiety, but there were also light, compassion and hope.

I would like to say thank you to everyone and see you for ‘All Tomorrow’s Parties’.

** A big you to Alex for collaborating with me on this interview. If you’re interested in learning more about Then Comes Silence please visit their Facebook page. To purchase merchandise visit their Band Camp merch store. Their music is also available on streaming services such as Spotify and iTunes.