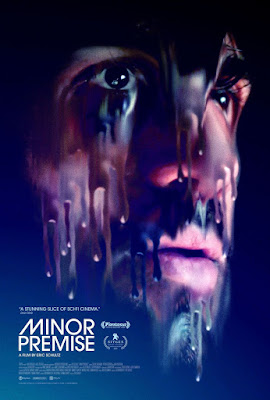 Sathya Sridharan stars as Ethan, a neuroscientist who develops a machine that maps memories and emotions. It all sounds good until he tries it on himself and split himself into ten different emotional version  that show up for six minutes every hour. Now he and his ex-girlfriend have to rebuild him while avoiding the negative emotions that show up every hour.

Heady science fiction film works and excels thanks to the work of Sridharan. His is a masterful performance that is worthy of a dark horse Oscar run.  As some people have pointed out, it's not really one performance but ten. It's such a good performance I'm shocked that more people aren't talking about it.

Over all this is a good little film. I'm not sure how much more to say beyond that. However before you read anything into that, be aware that I have been chasing this film since Fantasia. Back in August I was told by several people that I had to see this film. This was the next great film. I had the film built up. And through circumstances I've been chasing it since then. Now that I've seen it I liked it, but I'm not over the moon as some of my fiends were. Seeing it after four months of hype has definitely effected my feelings toward the film.

Is it worth seeing? Hell yea. If nothing else Sathya Sridharan gives one for the ages. If you like heady films MINOR PREMISE is recommended