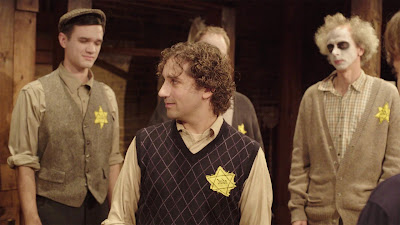 Why the cyclists?
Why the Jews?
A repeated refrain in The Last Cyclist

Film version of the the play the Last Cyclist which was to be performed in the concentration camp known as the Terezín Ghetto. The play, a very broad comedy, was a satire about lunatics escape from the asylum and taking over the world. They then insist that the root of all the trouble are bicyclists, just as the Nazi's insist it was the Jews.

First a bit of dry information. The film was shot before an audience at La Mama in New York. The performance is supposed be of the dress rehearsal of the play, since it was never officially performed because the elders in the camp feared what would happen when, and if, the Gestapo saw the not so subtle allegory. It is framed as a memory play by the only person in the production to survive the war. After the war she had written the play down from memory, though she had to alter it to fit the Communist ideas. Using historical interviews as a guide the play was then reconstructed by Naomi Patz to try and bring it closer to what was originally performed in the camp.

This film is very funny. Yes, the pall of evil and death hangs over it, but it is still wickedly funny. I say that because its genuinely true. This is the sort of absurdist tale that Ionesco might have written. There are very funny jokes that will make you laugh out loud. Yes you will feel self conscious about doing do but at the same time I can only imagine the freedom the jokes must have given the prisoners even for a moment.

While you will laugh, in the end the film will crush you. This may have been a "happy" play, but the place where it as created was not, as what happens in the end makes painfully clear. In the end reality crashes in and our hearts break. I was left weeping.  A brief flickering of light and hope snuffed out.

Where normally a film should stand on its own feet, THE LAST CYCLIST is rightly connected to history. I know if you don't know about the Holocaust much of the film' power would be lost. You need to feel the uncomfortableness that knowing this was created in an evil place, under the nose of the very people it was dismantling, and that only comes when you know at the start what the Nazis did and what, sadly came next.

A wickedly funny gut punch, THE LAST CYCLIST is recommended. 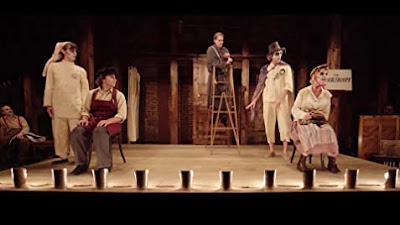