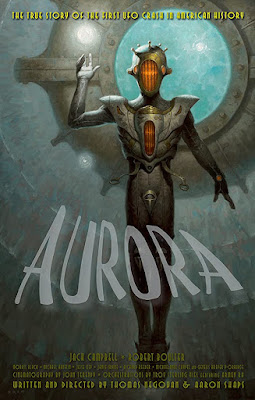 This is the "true" story of the alleged crash of an airship in 1897 Aurora Texas in a storm. Allegedly the ship broke apart and was thrown in a well while the occupant was given a Christian burial. Attempts to find the ship and the occupant over the years have failed.

Taking the crash as a starting point the film imagines that people in the town found the and brought him to the sheriff's office. What happened next is the film, but it isn't giving anything away to say that there is a monster involved.

I believe that Randi pointed me toward the Kickstarter campaign for AURORA and  liking what I saw I instantly threw some cash at the project in the hope of seeing the finished product. I am so glad I did.

The film is, for most of it's running time, a killer homage to black and white 1950's B science fiction films. Running a lean 30 minutes this film beautifully generates more tension than most five or six other recent feature length horror films combined. Gloriously it does so using just words and shadows. The film is mostly people talking about what happened and it creepy as all get out.

If the film has any flaw it is in the brief monster sequence. Looking like the man in a suit that it is, it never looks real. Yes, it looks cool, but it never looks right with it's fixed mouth and over sized hands causing groans within the context of the film This is one one the very few fils where you don't want to see the monster..Fortunately the rest of the film is so good that you can't help but not mind.

Sadly AURORA illustrates a problem with many Kickstarter projects, they fade away. Yes, a good number of them get completed. Yes, they will play festivals. But at the sametime the projects then vanish never to be seen again. I only knew about the film because I kicked in money. If I hadn't I would never have known.  And lest you think that this film didn't have some sort of profile at one point realize that best selling Author Neil Gaiman was hot on the project enough that he is quoted in the material for the film and thanked in the credits. (additionally it also suffers from having a title that it shares with dozens and dozens of others, but that is another story)

Ultimately AURORA is a great film. However it is a film you need to search out, because the festival run appears to be winding down (and in the age of covid certain) and because it really is that good.
Here is the IMDB page. Here is the film's page.