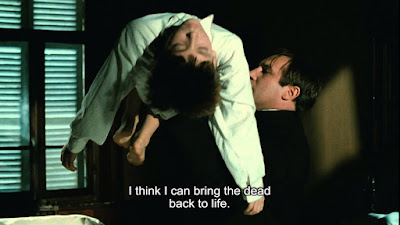 It’s difficult to evaluate Maurice Pialat’s Under the Sun of Satan without also considering its reputation as one of the most controversial winners of the Cannes Film Festival’s Palme d’Or. The first French film to win the Palme in twenty-one years since Claude Lelouch’s 1966 romance A Man and a Woman—which famously shared the award with Pietro Germi’s The Birds, the Bees and the Italians—it received a rare unanimous jury vote. The award ceremony’s audience responded with a raucous chorus of boos, leading to one of the most infamous moments of Cannes history when Pialat took the stage and responded “You don’t like me? Well, let me tell you that I don’t like you either!” So whether fairly or unfairly, it will always be subjected to debates over whether or not it deserved the Palme and if it cheated the “proper” winner out of its due.

Even a cursory glance at the year’s main competition slate raises eyebrows. Did the film truly deserve to win over Souleymane Cissé’s Yeelen, one of the very greatest West African films ever made? Or Tengiz Abuladze’s maddeningly overlooked glasnost fantasia Repentance? Or, perhaps most infuriating of all, Wim Wenders’ transcendent Wings of Desire? The answer to all of these is, in this critic’s humble opinion, a resounding, definitive no.

Whatever truth, beauty, or meaning the jurists saw in Pialat’s ponderous religious drama in 1987 hasn’t survived to the present day. Based on a book by Roman Catholic novelist Georges Bernanos, the film follows a priest played by Gérard Depardieu living in 1920s France who, in the midst of a crisis of faith, has an unexpected encounter with Satan while traveling down a country road. The experience leaves him shellshocked, but also capable of peering into the soul and inner thoughts of the people around him, powers which he uses in a disastrous attempt to save the soul of a pregnant teenager named Mouchette (Sandrine Bonnaire) who murdered one of her lovers.

Unlike Robert Bresson who adapted two of Bernanos novels into two of the most starkly powerful theological dramas of mid-century European cinema—Diary of a Country Priest (1951) and Mouchette (1967)—Pialat gets lost in sententious dialogue and philosophical ouroboroses, resulting in a film that glazes the eyes and numbs the mind despite its ravishing beauty. There’s little meaning, and even scarcer theological truth, in this confusing, opaque blob.
Posted by Steve Kopian at May 23, 2020