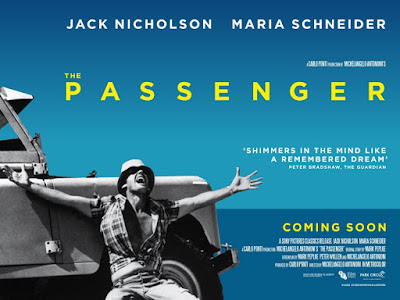 Two white men stand on the porch of a hotel. Before them lies the desolate Sahara desert.

“So still. A kind of…waiting.”

This exchange happens early on in Michelangelo Antonioni’s The Passenger, and it sets the tone for the entirety of this strange, stripped down meditation on identity and detachment. The entire film feels like one long held breath as its characters fidget in anticipation of things they can’t foresee or understand. Like many of Antonioni’s films, it centers on ennui-stricken Westerners vanishing in strange environments. But unlike the literal vanishings of an Italian aristocrat in L’Avventura (1960) or a possible murder victim and fashion photographer in Blowup (1966), this vanishing is more metaphorical but no less consequential.

While filming a documentary on the Chadian Civil War, frustrated television journalist David Locke (Jack Nicholson) steals the identity of an English friend named Robertson (Charles Mulvehill) after discovering him dead in a hotel room. Freed from the cares and anxieties of his old life, his new one is suddenly disturbed while rooting through Robertson’s things back in Europe, discovering that he was a gunrunner supplying arms to African rebels. When Robertson’s contacts catch up with him and pay him for his next “shipment” he goes on the run from not one but two lives, pursued from the first by his wife Rachel (Jenny Runacre) and from the second by the police and secret agents. The film then becomes a doomed road movie as Locke and an unnamed architectural student he starts an affair with in Barcelona (Maria Schneider) move towards a scheduled meeting in Robertson’s appointment book. Both seem to know they’re headed towards an Appointment in Samarra, but neither can seem to put the journey off.

Much of the film depends upon Nicholson’s performance who, despite having been New Hollywood’s resident superstar for several years, appears without a glimpse of traditional star power. He seems exhausted, both physically and spiritually, his face as much a cypher as the strange twisted Gaudí towers he encounters in Barcelona or the endless sand dunes of north Africa. Luciano Tovoli’s cinematography here is justifiably the stuff of legend—whether his camera drifts through time during flashbacks or phases through gates during the voyeuristic finale, one never gets tired of simply looking at this heady yet affecting cinematic riddle.
Posted by Steve Kopian at May 25, 2020