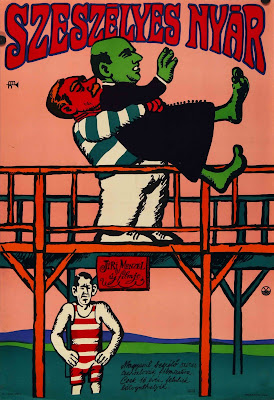 Sometimes a film doesn’t have to be ground-breaking or influential to be good. Sometimes, it’s enough to just be pleasant. And Jiří Menzel’s Capricious Summer is a very, very pleasant film. Vaguely set at some point in Interwar Czechoslovakia, the film largely takes place in a lakeside bathhouse in an idyllic countryside warm with the drowsiness of summer. Portly vacationers sun themselves on the dock in between sudden cloud bursts that drown half-drunk glasses of wine. Men float in the water, puffing at cigars as their wives playfully flirt with their friends. There’s liquor in the cups, sausage on the tables, and thoughtful conversation on the lips of everyone. Jirí Susi’s cinematography suggests delicate pastels as if everything, even the water and grass, has been gently bleached by the sun. It’s the kind of cinematic world you’d love to crawl into. And within this world Menzel weaves a wistful comedy of love and foolishness.

The film follows the romantic fortunes of three friends: Antonín Dura (Rudolf Hrusínský), the grouchy owner of the bathhouse, ex-soldier Major Hugo (Vlastimil Brodský), and a priest named Roch (František Řehák). The three fall in love with Anna (Jana Drchalová), a dancer in a circus that’s come to town led by magician and tightrope walker Arnostek (Menzel). The film sees all three attempt to seduce the eager and willing Anna, yet fail at the very last moment. When the brutish Antonín corners her in his bathhouse, his demeanor melts into that of a nervous child, leaving him incapable of doing anything more than giving the dancer a foot massage. When the Major takes his turn at Anna’s circus, his seduction is suddenly interrupted when Antonín is rushed into their lodging after taking a terrible fall during his tightrope act. And when the hapless Roch tries to cozy up to her with a collection of Ovid’s love poetry, he gets attacked by a group of villagers. Eventually the frustrated Anna leaves the town in a huff.

The film plays almost like a light-hearted prediction of Luis Buñuel’s That Obscure Object of Desire (1977), another comedy about sexual frustration, but lacking the Spaniard’s characteristic misanthropy. Capricious Summer is very obviously a bemused fantasy instead of a surrealist indictment of human nature—we never get the impression that we’re supposed to dislike the characters, even as they go behind each other’s backs or attempt adultery.
Posted by Steve Kopian at May 24, 2020