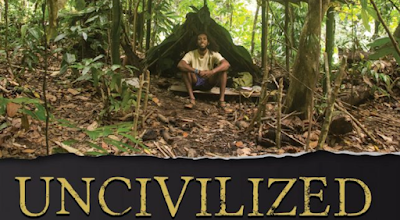 Director Michael Lees returns home to Dominica to live in the jungle and off the land for six months. He is looking for something but he isn't sure what. Not long after he goes into the jungle hurricane Maria, a Category 5 storm hits the island and devastated the country. He then uses what he has learned to help rebuild.

Odd mix of films crash together to form a film I'm not quite certain of. The film starts off as a navel gazing search to find one's self. It then veres off into an intriguing discussion about society when Lee talks to a man who has been living off the land for decades. The film then swerves into a pseudo-Discovery Channel  film like Naked And Afraid as we watch Lee learn to live off the land. Then the storm hits and the film becomes and interesting look at the aftermath.

I don't know what I think of the film. I certainly love pieces of it but I don't know if the films all over nature really works. I suspect that if the storm didn't happen the film probably would not have made it to Brooklyn since the before stuff is, largely, nothing we haven't seen before.  The post storm stuff at least takes us into largely unexpected directions, at least as far as the first half of the film is concerned.

There is enough here to make a viewing for the curious worth seeing but I'm not going to give a blanket recommendation.
Posted by Steve Kopian at May 29, 2020