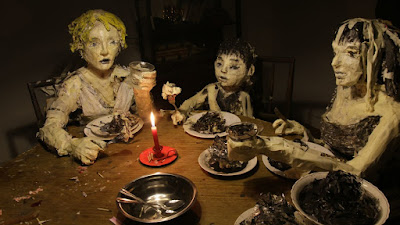 Joaquín Cociña and Cristóbal León‘s THE WOLF HOUSE is one of the best films you are likely to see all year. I’m still pondering where it stands in the pantheon of animated films. At the same time I’m not sure how big the audience for it will be. The film which is a kind of fairy tale is based on what happened in the the Dignity Colony, a German immigrant community in Chile where abuse ran rampant.

It begins with a live action film about the Colony. A narrator tells us what a great and wonderful place it is and how good the honey is. The film then shifts into an animated tale found at the Colony. It’s the story of Anna, a young girl who is punished for letting three pigs escape. Told she will spend a 100 days without being able to speak with anyone, so she escapes and ends up in a house with two of the pigs. Outside a wolf lurks. As Anna waits for the wolf to go away the pigs morph into a boy and girl. Forming a family, Anna begins to treat the kids as she was taught in the Colony.

Surreal doesn’t begin to describe this ever changing feast for the eye and brain. Using a mix of every type of animation the story and of her charges evolves from moment and moment as reality becomes less certain. It’s incredibly hypnotic to the point that you’ll need multiple viewings to see all the little visual clues and riffs lurking everywhere. I wanted to right down all of the things passing before my eyes but I couldn’t look away because there was simply too much going on. Reality truly is what we deem it to be.

It is all deeply disturbing partly because watching the film in the dark never puts us on any solid ground. Literally nothing stays the same, everything constantly changes to the point where we don’t know what reality is because the images are always morphing. The fairy tale structure further divorces us from reality as does the fact that Anna descends into the cult mindset over the course of the film. There is a kind of creeping madness all through the film and it infects us and our view of reality.

Away from the visceral gut punch there are all sorts of things to ponder, but you'll for give me if I leave you to discover them since I am still processing, and because you truly need to see how they are presented so you understand what and how exactly the film is making its points.

This was one of the best films Isaw in 2019. Highly recommended for anyone who wants to walk on the dark side and have their heads messed with.

THE WOLF HOUSE opens Friday in New York before playing around the country. 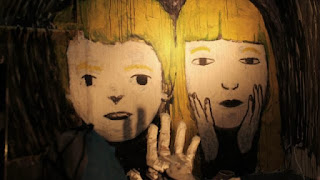