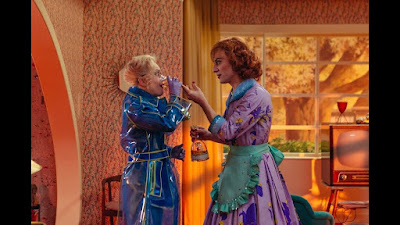 If you strained John Waters and Pedro Almodóvar through a cheesecloth, the curds left over after all the whey had been drained would probably look something like Sebastiano Mauri’s Fairytale. Based on a stage play written by the film’s star Filippo Timi, nearly the entire production takes place in a single house set resembling a fever dream vision of 50s American domesticity. The candy-colored interiors all seem shellacked with the tacky detritus of the sedentary, affluent middle class, best demonstrated in a tinsel Christmas tree perpetually parked in the living room. From the windows can be seen different landscapes of the American collective unconscious: the Sonoran Desert, the New York City skyline, Main Street, USA. And hovering at the center of it all is Mrs. Fairytale, a fashionable housewife who spends her days gossiping with her best friend Mrs. Emerald (Lucia Mascino) and playing with her taxidermied poodle named Lady who, despite being dead as a doornail, has a mind of its own, disappearing and appearing around, within, and without the house as it pleases. She’s occasionally visited by three identical triplets (all played by Luca Pignagnoli): one talks with her, one teaches her the mambo, one fixes her boiler. In all, it’s a seemingly perfect life.

Except for one thing: Mrs. Fairytale appears to be turning into a man. Well, two things: she’s also falling madly, and carnally, in love with Mrs. Emerald. Fairytale is an Italian parable of transsexual awakening that bases itself in kitschy Americana as a tribute to the Golden Age of Hollywood, using the vibrant Technicolor melodramas of Douglas Sirk as a starting point to create an imaginary, plasticine world where the fabric of reality warps as readily as Mrs. Fairytale’s genitals. But Mauri and Timi do more than ape the visual aesthetics of Sirk’s era, they also retrofit modern American anxieties like rampant gun violence (Mrs. Fairytale keeps a gun-rack by her front door for guests to store their rifles like they were umbrellas) alongside traditional Cold War ones like alien invaders and UFOs.

This Italian pantomime of American culture sometimes overlaps its primary focus on Mrs. Fairytale’s transsexual transformation, which by the third act almost collapses in on itself with a strange twist ending suggesting everything might (or might not) have been a dream. Still, as a visual experience and exploration of sexual identity Fairytale is fascinating, if not necessarily essential.
Posted by Steve Kopian at May 19, 2020