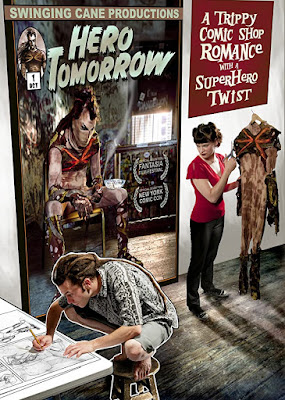 With the Covid lockdown in force I'm going through stacks of stuff in order to see what has to be kept and junk. I am finding a number of DVDs that pushed behind things. In a bag of stuff from a semi-recent New York Comic Con I found my signed copy of HERO TOMORROW by Ted Sikora. Double checking as to whether I reviewed it for Unseen or not, I found I did not. (Apologies to Mr Sikora)

HERO TOMORROW is the name of the comic shop where David's girlfriend works. David is a wannabe comic writer and artist whose character Apama is an spirit animal like Wolverine. No one is interested and so he spends his days cutting grass, getting stones, working on his comic and getting yelled at by his parents. When his girlfriend gives him a costume based on his character things begin to slide as David imagines himself as Apama.

Dry humor mixes with low key drama to form a solid little film. This a beautifully crafted small film that has a nice warm heart at it's center. I love that it walks into the field where comics crashes into reality so we see the troubles of being a superhero as David's flights of fantasy don't always go well. You can't just become you're secret identity.

While the film isn't perfect, the performances are uneven for example, the film still moves us with it's humanity.