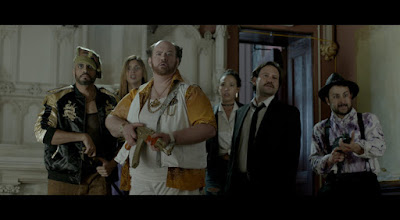 Snatchers is the the story of of a bunch of friends living in Brooklyn who come together to fight off an alien invasion which started in a Mennonite community.

How you react to the film will depend entirely how you react to the humor. Broadly painted and aimed at hitting every Brooklyn cliche (done with affection) and obvious gag, the film film is not for all tastes. It was not to my taste and I had a hard time getting to the end.

The problem for me was that despite having a sturdy plot the targets are a little too obvious. While the jokes aren't bad as such they aren't strong enough to keep you watching for 85 minutes. This could have been a great short, but honestly there isn't enough here to support an hour and a half
Posted by Steve Kopian at May 31, 2020