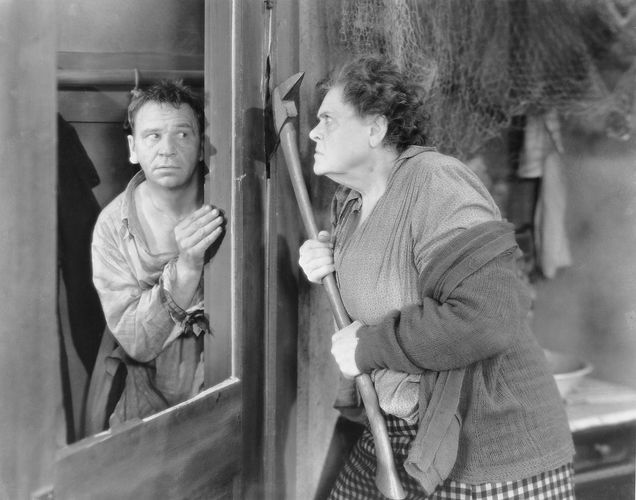 Marie Dressler had the kind of face that’s all but vanished from today’s Hollywood, one with lumps and bumps, ridges and wrinkles in all the wrong places. Not that there aren’t unconventionally attractive actors nowadays like Adam Driver or ones who’ll happily ugly themselves up for awards season. But there’s a certain lack of performers who look like they could’ve been plucked from the drunk tank in a police station or yanked from a factory line in a nowhere town. Steve Buscemi was probably the last one before America’s cinematic ugly well dried up, and it’s all the lesser for it.

Consider Dressler’s performance in George W. Hill’s Min and Bill (1930) for which she won the Academy Award for Best Actress. She plays Min Divot, the wizened proprietor of a dockside inn near a port. A crass, surly, churlish woman, she looks nothing less than a gargoyle as she sneers and glowers at the people around her. When she’s particularly suspicious, she lets her bottom jaw hang open, bearing her bottom teeth like a bulldog readying for an attack. It’s ugliness personified, and it’s all in the service of throwing audiences off-guard. For deep down Min is deeply loving and compassionate.

Min and Bill is a melodramatic weepy in the sacrificial mother mold, similar to Olive Higgins Prouty’s frequently adapted novel Stella Dallas. (Perhaps not coincidentally, both Min and Bill and the first cinematic version of Stella Dallas were penned by Frances Marion, one of Hollywood’s best, most prolific, and most feted early screenwriters.) The film charts her relationship with her adopted daughter Nancy Smith (Dorothy Jordan) who was dropped into her lap at six months old by her self-destructive prostitute mother Bella (Marjorie Rambeau). Min would do anything for that kid, even force her to leave her to attend a nice school so she can make something of herself. Of course Min can’t show that kind of affection openly, so she hides it in angry outbursts when she catches Nancy canoodling with no-good bozos on the docks. It’s a powerful, heart-breaking performance that belongs in a better film.

At only sixty-six minutes, it feels like there’s an entire third of the story missing. How spotty is the pacing? Well, an early boat chase largely predicting the future of action-oriented cinematic grammar feels completely out-of-place despite easily being the film’s highlight.
Posted by Steve Kopian at May 28, 2020