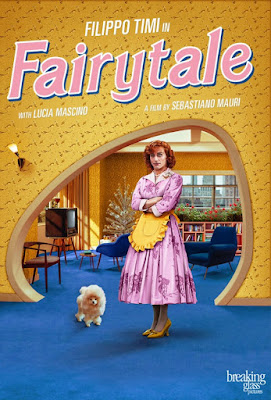 The film version of Filippo Timi‘s play FAIRYTALE is a must see. Why this film isn't the subject of heated and passionate love  is completely beyond me. More to the point why isn't there Oscar buzz around this gem?

Set in the saturated colored world of 1950's American TV unreality, the film follows Mrs Fairytale, as she begins to realize that you have to be who you are love who you do.

I had been sent material on this film and I had passed. I watched the trailer and while it intrigued me it didn't move me enough to pivot out of film festival mode to fit it into my schedule. Then I got an email from Liz Whittmore asking if I had seen it and if not why not because it was one of the best films of the year. I immediately tracked down a copy because when Liz says something has to be seen she is usually dead on. And in this case Liz is right- this is probably one of the great films of 2020.

I suspect that the reason this film is not being more talked about is the deliberate unreality of everything in the film. Everything is pumped up, from the colors to the cliche visions of 1950's America, to sets that look like stage sets. If you don't see the film  and only look at the trailr it looks like it is trying to be high camp film, but the reality it is not. Everything in this film is not a random kitschy throw away but a deliberate choice that is there because it will work on you emotionally.  Director Sebastiano Mauri and writer and lead Timi are going to set you up before pulling the rug out from under you by playing with expectations. It may look like the wrong sort of over the top, but there is a reason for it, the film is playing a long game and when reality comes in it results in an ending that had me tearing up in all the right ways.

Forget what you think from the stills and trailers since what you are getting in them is not really the film. Yes, they are clips from the film but they are not the sum of the film's parts. What the images mean when you see them in the order of the film is not what you think out of context. Trust me I know the big and tall Timi with his five o'clock shadow in a wig and a dress may seem like a goof, but the reality is something way more. Timi's Mrs Fairytale is far from a cartoon but something soulful and at times heartbreaking.

FAIRYTALE is nominally a comedy. It is a send up of all the cliches of the staid 1950's and 60's. You will be constantly be laughing out loud for large portions of the film. However in it's breast beats the heart of a deeply moving drama. Timi the writer has fashioned an impassioned pleas about being who we are. Timi is masterfully subverting not only the cliches  but also his sending up of them. Watching the film a second time what I thought was a very funny comedy had a very bittersweet edge to it. I knew what the film's ultimate aim was and earlier bits caught in my throat as the bright colors became shaded in shadow.

Make no mistake this is a masterpiece.

Watching the film I wanted to see this on stage. I wanted to see how this would play out before a live audience. I also was curious how the play would end since the film does something that no play could ever do, creating a perfect ending that put a bow on the whys and hows of everything that went before and which could not happen in a theater.

I saw one reference to this film saying that the film is destined to be a cult classic. Let's leave the cult off and just say it's probably going to be a  classic.

FAIRYTALE is out on DVD and VOD
Posted by Steve Kopian at May 17, 2020