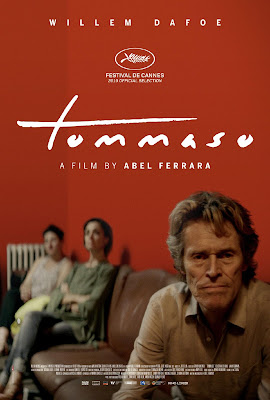 Abel Ferrara returns to narrative filmmaking with TOMASSO starring his frequent collaborator Willem Dafoe as an artist with a younger wife and young daughter living in Rome in a tale the echoes the directors own life.

Dafoe is the reason to see this film. Giving a power house performance where he is not only physically burning down the house but showing life behind those eyes, he should be an early front runner for an Oscar in what is at times one of his best performances. Dafoe is front and center for the whole film and makes it clear why he likes to work with director Ferrara - he gives him roles that force him to use every fiber of his being.

As for Ferrara himself I'm not too sure what he is up to or what he had in mind.

The problem is that after a section of familial drama where life happens Ferrara begins mucking about. Tension rises as Dafoe's marriage begins to fracture. This sends Dafoe into a tailspin and...well he ends up on a cross. Honestly I don't know. I really don't.  The problem is in the plotting which after a while there stops being a narrative flow and things just happen. You can feel Ferrara moving his pieces around because he has an idea for a great scene. Don't get me wrong what is on screen is great- the problem is nothing connects, how do we get where we are going and why did it happen? It is not always clear. It's almost like he cut out the scenes that explain things. I am still not certain why there is problems between Dafoe and his wife.

Don't get me wrong I am a huge Ferrara fan. I have been since Ms 45 and Driller Killer. I love that he dares to try things. I love that sometimes things only work in parts because we get to have these wonderful pieces. I adore that he is a director who says to hell with the critics or studios I' going to make my art. However at the same time I have to admit that sometimes he doesn't miss the mark but the whole barn.

He missed the barn this time. Yea, Dafoe is great and there are whole sequences I love to pieces, but the film as a whole doesn't hang together. Though in his favor the way it ends up is more a near miss than a major one, which is why this is so frustrating it is so close to being there that you can't help but focus on why it hasn't come together to be a truly great film (I mean there is greatness in it)

Should you see it? If you are a Ferarra fan absolutely. If you want to see a performance that Oscar will ignore but shouldn't, yes. If you want to see a film with great pieces and moments that id trying to do something atypical and not quite making it work certainly. On the other hand if you want a film that works from start to finish and is perfect look elsewhere.
Posted by Steve Kopian at May 31, 2020