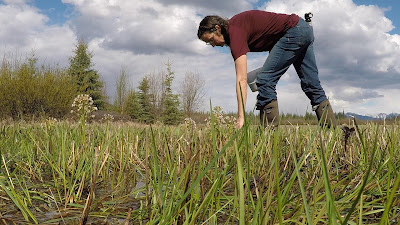 Filmmaker Suzanne Crocker makes the decision that for one year her family will only eat food that is gown,hunted or sourced locally in and around her home in Dawson City in the Yukon.

I am not going to attempt to know if this film will work for you or not since watching it I was very aware that this is going to be a film that works for some people and not for others. How you react will depend upon how interested you are in the subject, how you connect to Crocker and how you react to the low tech means of shooting.

The film follows Crocker over the course of a little more than a year from when she springs her grand idea on the family, through their first efforts to only eat locally sourced (some of the food is not enjoyed at first), on through her making connections with her neighbors who teach her about what they can eat and how to prepare it. If you ever wanted to know how to live off the land or were interested in shows like Mountain Men on cable but found them a bit too showy, this film is for you. We are there as Crocker learns about all the things around her she can eat and how to prepare it.

Personally my interest in the film came and went. That is not an indicator or the quality of the film more that certain parts of the film were more interesting to me than others. It didn't help that  I never really clicked with Crocker as a person. And while I shouldn't say this I also had a difficult time with the DIY way the film was shot.  While I understand the hows and whys of some shots (Crocker was carrying the camera to an event or had set it up in a field to film herself gathering food) the images tended to overwhelm me with somethings being too low and too close and the lens of the Go Pros or whatever she used to shoot, making images that looked wrong to me.

As I said above, I am not going to guess how you will react to the film. Watching the film at home I had some of my siblings wander by while it was on and they stopped to watch it for a bit. They found the piece they watched involving how the meat was carved up fascinating.

FIRST WE EAT is going to play Hot Docs Virtual Film Festival at the end of the week. For details and more information on how to watch go here.
Posted by Steve Kopian at May 26, 2020