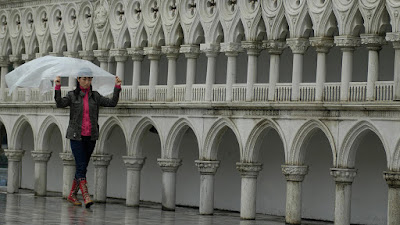 Jia Zhangke’s The World has the kind of setting that would make the Surrealists weep with joy and envy. For his first film shot outside his native province of Shanxi, Zhangke turned his camera to the Beijing World Park in the Chinese capital. The 115-acre theme park boasts recreations of famous landmarks the world over for tourists who either can’t or won’t travel outside of China. Scale models of Big Ben, the London Bridge, the Eiffel Tower, and Notre Dame share a corner next to a miniaturized Manhattan skyline (one employee brags that the real New York City lost their Twin Towers but they still have theirs). Excited tourists pose for selfies in front of St. Peter’s Basilica while others mime holding up the Leaning Tower of Pisa. Elsewhere a small army of guards dressed like Communist soldiers carry water cooler jugs past the Great Pyramid of Giza while down in the park’s bowels dozens of performers zip themselves into kimonos, qipaos, and sarees for lavish stage shows. They even have a retired international airplane parked onsite staffed with flight attendants so visitors can pretend to experience what most travelers consider the most tedious or terrifying part of traveling: flying. It’s all part of a spectacle created by the Chinese, for the Chinese. The park’s slogan: “Give us a day, we’ll show you the world.”

Within this faux-international microcosm Zhangke weaves a tapestry of stories both devastating in their specificity yet achingly universal. Couples fall in and out of love while foreign performers have their passports seized by unscrupulous managers. Women are reduced to prostitution to support and visit loved ones while men far from home die on unsafe construction sites. Co-workers who speak different languages comfort and soothe each other through tragedy despite not understanding anything the other is saying.

Zhangke’s pacing is glacial, moving with the lumbering god’s-eye sweep of great novelists like Dickens or Hugo who always contextualized their characters as individual cogs in a greater, unseen whole. And like all great works of art, it’s taken on greater meaning in the years since its creation. Watching The World in 2020, one can see different potential semiotic meanings in the park. What seemed an egalitarian fantasy-land in 2004 now could be seen by some as a trophy collection celebrating Chinese economic domination. Who knows what it might suggest in another sixteen years?
Posted by Steve Kopian at May 13, 2020