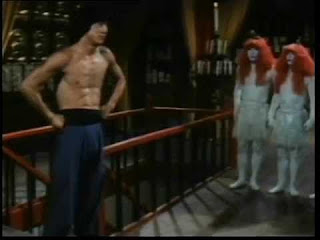 Producer Lo Wei wasn’t quite sure what to do with Jackie Chan after he returned from being loaned to Seasonal Film Corporation in 1978 for a two picture deal with director Yuen Woo-ping. Wei had helped launch Chan’s career in 1976 by casting him as the lead in a number of unsuccessful Bruceploitation films. But after the smash success of Chan’s two kung fu comedies with Yuen, suddenly he was one of the hottest performers in Hong Kong.

Yet Wei still couldn’t quite get the hang of how to use him. He tried reverting back to the Bruceploitation format with the dour, overly serious Dragon Fist (1979), and he tried replicating Wong-ping’s comedic magic with other directors like Chen Chi-hwa for the wacky yet terminally scattershot Half a Loaf of Kung Fu (1978). Wei’s own Spiritual Kung Fu was another attempt to reverse engineer the Chan formula, this time throwing him into a supernatural comedy. But unlike Chan’s fellow Peking Opera School graduate Sammo Hung who pioneered a new horror comedy subgenre with his own martial arts hybrid Mr. Vampire (1985), Wei’s film didn’t make significant waves.

Spiritual Kung Fu isn’t a bad film by any means, and it has a surprisingly original plot when compared to Chan’s other films of the era: after a thief steals a tome containing a forbidden style of kung fu from the Shaolin Temple’s library, upstart student Yi-Lang (Chan) is contacted by five ghosts who teach him the long-lost techniques that can counter them. The issue is the slapdash execution. Most of Spiritual Kung Fu is played as a straight mystery thriller. There are secret identities, mysterious assassinations, and shocking twists galore as the monks feverishly try to figure out who stole the secret techniques and why. Yet the scenes with Chan and the ghosts are played like crude, childish farce. The ghosts—who with their white, full body leotards, skirts, and yarn-like red hair look like malevolent Raggedy Andy’s—act like young, petulant schoolchildren as they go about invisibly causing mischief and mayhem.

Still, the fight scenes are superb, particularly a prolonged sequence near the end where Yi-Lang passes the Shaolin Temple’s final examination by defeating over a dozen opponents simultaneously while armed only with twin tonfa. The shots of Chan fending off four, five, or six enemies at once are dizzying masterstrokes of fight choreography.
Posted by Steve Kopian at May 14, 2020