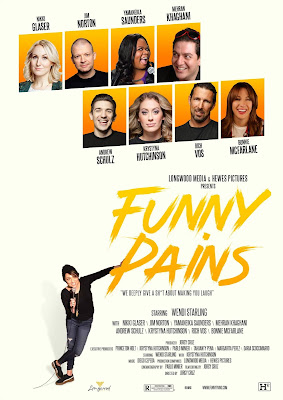 All over the place look at stand up comedy is framed as a look at comic Wendi Starling who we watch perform, write, go through her daily life and struggle with mental illness.

I am not sure what to say about FUNNY PAINS. As something to make you laugh it is a really good. One can't go very long without smiling or laughing, something that increases whenever we get into the rooms where Starling and other comics are hanging out talking. This film will most assuredly make you laugh a lot.

On the other hand the film was edited via a food processor by caffeine addled chihuahuas on speed. The film starts with a combination recollection and a stand up bit as Starling talks about having manic incidents that include Hugh Jackman appearing to tell her he isn't real but it would be all okay. It then leaps off to follow her through her day and then pauses periodically to have comics sit around talking before more of Starling on the street or performing. Who in the hell edited this and can I hit them with something big and heavy like Buick?

There is no real ground work there is just randomly put together bits that drive everything forward before bouncing backwards and sidewards. You really don't get any sense of Starling other than she is a crazily busy comic who performs, does a podcast and still needs a day job. And frankly I could have read that sentence before seeing the film and I would have known just as much at the end.

In all honesty as a film FUNNY PAINS is a fucking mess.

On the other hand it is god damn hysterically funny as the jokes fly from start to finish. This is a solid laugh producer.

If you want a good well made film look elsewhere. If you want to laugh this film is just the ticket
Posted by Steve Kopian at May 23, 2020