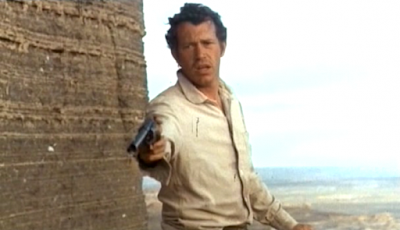 For his 1966 film The Shooting, director Monte Hellman adopted a sparse aesthetic that emphasized, above all, distance. This distancing was literal in the film’s use of only a handful of characters placed within vast, empty environments of sun-baked deserts and dusty canyons. The setting might be the Old West, but it may as well be another planet completely devoid of other humans. Cinematically, Hellman accentuates this sense of distance with a rigid visual style that borders on mannered. Largely eschewing traditional Hollywood visual grammar, most of the film takes place in long and medium shots with dialogue usually occurring in two- or three-shots between characters occupying the same space. There’s relatively little shot-reverse-shot dialogue, and Hellman will sometimes disassociate said dialogue from the speakers by turning his camera on characters not involved in the conversation. This has a strange effect of straining the spatial link between the humans, the story, and the world they inhabit—in short, more distance.

Despite featuring Hollywood stars like Warren Oates and Jack Nicholson, The Shooting is defiant in its rejection of what audiences usually expect from Westerns. For one, it looks unlike most Westerns of its era: financed by Roger Corman, the film was shot for pocket change in less than three weeks with only natural lighting. In a way, its visual ruggedness predicted the washed out, rustic look of much of New Hollywood.

But most importantly, The Shooting is unique for its bizarre narrative. It focuses on two bounty hunters, the stoic Willet Gashade (Oates) and his paranoid friend Coley (Will Hutchins), who find themselves escorting a mysterious unnamed woman (Millie Perkins) across a nondescript wilderness after their mutual partner was murdered by an unseen assailant. They’re eventually joined by an unstable gunslinger named Billy Spear (Nicholson) that the woman insists on hiring as protection despite—or possibly because of—his obvious insanity.

In many ways it feels like a Western by way of Alain Resnais (and no, I didn’t cop that comparison from Jonathan Rosenbaum thankyouverymuch), particularly in how it features characters pushed and pulled in strange environments by forces beyond their comprehension. It’s easy to sense echoes here of the dreamlike, fragmented reality of Last Year at Marienbad (1961). But also like that film, it’s easy to dismiss the deliberately obfuscated characters and inexplicable plot as arthouse pretentiousness. One’s mileage depends on one’s patience for postmodernism.
Posted by Steve Kopian at May 27, 2020