The Color of Medicine: The Story of Homer G. Phillips Hospital hits home video on May 12 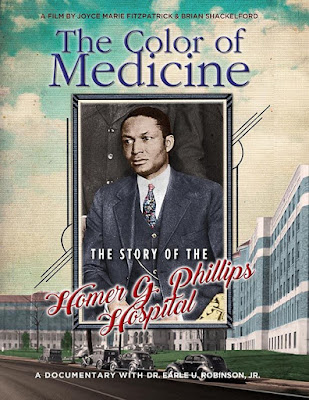 Excellent documentary that in a nominally on the Homer G. Phillips Hospital in St Louis, but which transcends its titled subject matter to not only give a portrait of the African American community in the city but also in America. It is a film which highlights the differences in how African American's were treated in hospitals and why it was segregated hospitals to exist so African Americans could get the care they needed.

What I love about the film is that the film doesn't just jump into the story of the hospital, it lays the groundwork by explaining the history of St Louis  for several decades before. It also explains who Homer G Phillips was and why he matters to not just the story of the hospital but the country as well. As one person says that his murder was on the order of th death of Martin Luther King. Once we are grounded the film then takes off.

Full of old pictures, film and the right sort of talking heads THE COLOR OF MEDICINE keeps the whole story in context on every level. This maybe the story of one hospital in the Midwest but it echoes out and we come to understand what it was like in other cities without a hospital specifically for African Americans and in those cities with them. It is also the story of civil rights but from a point of view that most of us have never considered.

This film is a quiet masterpiece and required viewing.
Posted by Steve Kopian at May 11, 2020