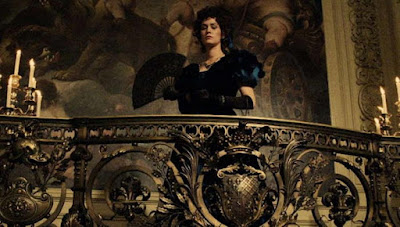 With the full miniseries five and a half hour miniseries hitting Virtual Theaters on Friday I am reposting my review from the 2010 New York Film Festival.  The version I saw ran just over four and a half hours. My notes indicate that I was told that most of the missing material are the opening and closing of each of the 55 minute episodes and recap material as well as "next time" teasers.

One thing I should have really discussed when I wrote this originally was  that the problems I have with the plot are the problems with the novel. This was written in installments over a long period of time and was simply supposed to be a soap opera that keep people coming back to the publication each week or whatever. It was not  planned out by Camilo Castelo Branco as a grand novel, it was just written so he'd get paid, the result it is plot that goes to a certain point when it suddenly wraps up because Branco was told it was time. My notes from the Q&A with the screenwriter indicate they knew there are "plot problems" but went with it understanding that was how it was written.

The film is based upon The Homonymous Novel by Camilo Castelo Branco. It was written in a serial fashion in I believe they said weekly installments. When it was put together the book filled well over one thousand pages.

The film is like being trapped in a pinball machine filled with mayo. The story and film immerse you deeply into the time and place that the film takes place but it's construction pings you around constantly from pillar to post as character after character stops the present story to tell you a story about the past. It's wheels with in wheels and stories with in stories.

The primary focus of the story is a young boy named Pedro daSilva who living in an orphanage that is run by a Father Dinis. As the film unfolds we are primarily following his story, but with long detours into the lives of everyone around him, all of whom have multiple identities and some connection to nobility. There are love affairs, duels, death, revenge, convents,rescues and several other things I'm forgetting.

Not particularly. The trouble is that the story is so fractured that it never seems to build up a real head of steam. Honestly I was bored for much of the first hour. It finally clicked, I think because it was throwing so much out it had to hit the mark eventually. The blame is partly the source novel which was written on the fly to fill a page count and had to keep readers interested. This leads to weird turns and some inconsistencies in the story (The time frames are messed up).

The film is also very silly. I know some of it, like the servant who is a refugee from The Ministry of Silly Walks was intentionally put in there, other things I'm not too sure about. A suicide of an unnamed character brought chuckles from the people behind me.

I'm not sure what director Raul Ruiz was up to at times since listening to the screenwriter talk he said that the director added bits to make things memorable. However other things like long takes that don't seem to end or serve a point confuse me since they seemed more like filler.

The film itself ends on a note of uncertainty, at least as far as I'm concerned. Its one of those was it real or was it all a fevered dream sort of things that feel like a cop out. I don't know how the book ends so I can't say. What I can say was that the ending kind of sent the film crashing down for me. I think I could have taken the numerous WTF moments that pop up here and there during the preceding four hours and twenty five minutes had the ending lead to something. It doesn't and your left with a story that just sort of hangs there with all of these odd moments that make no sense (the previous mentioned suicide).

I know the problem with the incestuous nature of all of the characters somehow knowing everyone in a manner that is way too neat comes from the book, but the rest of it...is just weird.

I know that I could have forgiven the film had the film been about something, other than the notion of identity which is obvious and too small a notion to fill five hours of screen time. It would have worked in a 90 minute movie, but almost five hours was too much to ask. Had the film not had an aire of being about something more it could have worked, I mean the old movie serials run about as long and are about nothing but motion. This film is touted to be about something, but I find it's about...nothing.
Posted by Steve Kopian at May 20, 2020