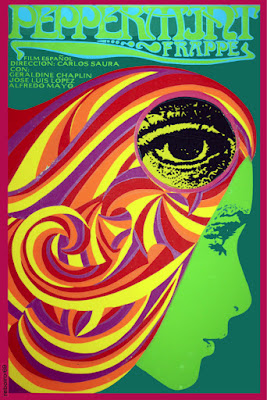 Even if you didn’t know that director Carlos Saura intended for his film Peppermint Frappé to be an homage to his mentor Luis Buñuel, its similarities with the work of that great Surrealist are too numerous to be coincidental. Truthfully, it’s less an homage than an imitation, a careful consideration of how Buñuel would approach and engage with the story, in this case a psycho-sexual thriller about memory and identity. The result is a kind of Spanish reimagining of Alfred Hitchcock’s Vertigo (1958).

The film tells the story of Julián (José Luis López Vázquez), a stuffy radiologist who falls in love with his old jet-setting friend Pablo’s new wife Elena. Convinced that he’d seen her previously while visiting Calanda during Holy Week, he nervously tries to reignite a relationship. But Elena insists that they’ve never met. Undeterred, Julián and Elena become friends, but their time together becomes more and more sinister as Elena and her husband start humiliating and playing pranks on him. Frustrated, Julián turns to courting his radiology assistant Ana, a mild-mannered, reserved young woman. After seducing her, Julián convinces Ana to start dressing and acting like Elena until—much like how James Stewart molded Kim Novak into the dead woman that haunted him—you can’t tell one woman from the other.

This replicating of feminine identities is further emphasized by Saura’s casting of actress Geraldine Chaplin as both the blonde Elena and the brunette Ana. Indeed, we realize Ana’s transformation has finished when she finally dons a blonde wig. Eventually the tale ends in murder with Ana/Elena replacing Elena (and Pablo) in Julián’s life. The film’s fascination with the perverse sexual obsessions of the European upper classes is purely Buñuelian, as is its implicit critique of Spain’s cultural Catholicism: Julián’s devout Catholicism is ultimately (and ironically) corrupted by the erotic fantasy of a woman he encountered during Catholic Holy Week celebrations. Buñuel must have found Saura’s tribute flattering, as he would mimic the film’s central gimmick by inverting it in his final film That Obscure Object of Desire (1977), casting both Carole Bouquet and Ángela Molina as the same Sevillean flamenco dancer the protagonist spends the runtime attempting to seduce. (Buñuel claims to have thought of the casting trick himself while drinking martinis during pre-production, but it’s hard to imagine his admirer’s film wasn’t lurking somewhere in the back of his mind.)
Posted by Steve Kopian at May 15, 2020