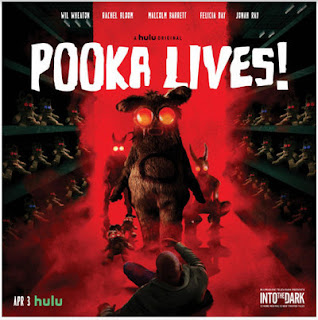 The Pooka franchise is like the Purge series in that one must first accept their wildly outrageous premises at face value before they can be enjoyed. The idea of a government-sponsored murder holiday is just as inherently preposterous as believing that children would actually love something as horrific as the Pooka dolls, an unholy cross between a teddy bear and Wes Craven’s Ghostface. Combine that with their eerie red eyes, their habit of repeating back random words they hear in a deep voice, and their maddeningly sinister jingle and you have something about as appealing to kids as the Annabelle doll. But the cognitive disconnect between their mass appeal and their appearance was perfect for Nacho Vigalondo’s Pooka! which premiered in 2018 as an episode of Hulu’s Into the Dark web anthology series. The doll’s terrifying design was the first and most striking indication that something was wrong in the life of its protagonist, a traumatized actor and obviously unreliable narrator.

But now Alejandro Brugués’ sequel Pooka Lives! has arrived, and since this film doesn’t take place exclusively in the mind of its hero it must be assumed that it’s occurring in the “real” world and that millions of “real” children love the damned thing. If one can’t get past that premise—and indeed, who could blame them?—they would do better to pass on the film entirely, for it takes Pooka’s popularity as given fact, not imagined fantasy. Mercifully though, Brugués abandons the original film’s bleak tone and aura of tragedy for more straight-forward comedy horror. If Pooka! was the atmospheric, high-concept Alien of the franchise, then Pooka Lives! is its over-the-top Aliens, raising the stakes, raising the body count, and raising the number of unstoppable enemies.

The film follows a group of thirty-something friends whose “Pooka Challenge” accidentally goes viral and somehow begins physically manifesting slimmed down versions of the toy to slaughter those they deem “naughty.” How? Well, witches and Tibetan mysticism are mentioned in passing, but in practice the causes are unimportant—what matters is that the killer Pookas serve as a metaphor for internet cancel culture and urban legends. It’s an interesting concept, but one that ultimately doesn’t live up to its potential as the film relies too heavily on hit-or-miss comedic relief. But as an sporadically light-hearted ensemble comedy thriller, one could certainly do worse.
Posted by Steve Kopian at May 31, 2020