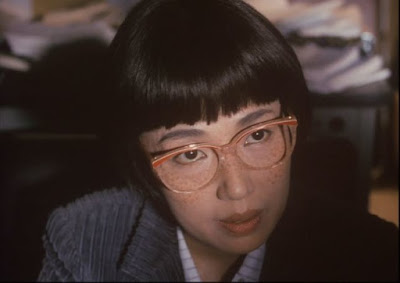 Juzo Itami’s A Taxing Woman dares to ask how much of a bastard does a villain need to be to make us root for a tax auditor. The answer: pretty damn bad. Inspired by his experiences with the Japanese National Tax Agency after the smash success of his debut The Funeral (1984), the film is a fascinating—although certainly exaggerated—look into the inner workings of Japanese tax investigators.

The film follows the various adventures of Ryōko Itakura (played by Itami’s wife Nobuko Miyamoto), auditor extraordinaire who makes up for her crippling lack of social etiquette and parental concern for her five year old son with an almost idiot savant talent for figuring out tax dodge schemes. Her main target in the film is Hideki Gondō (Tsutomu Yamazaki), a love hotel magnate with his hands in a number of very unscrupulous and illegal cookie jars.

Much like the films of Steven Soderbergh and the true crime gangster dramas of Martin Scorsese, A Taxing Woman is a film primarily about process, lovingly lingering on Japanese methods of tax dodging and tax auditing. Watching it, we learn how to create shell companies “owned” by terminally ill cancer patients designed to be dissolved at a profit upon their deaths, how to double-dip into a restaurant’s food supplies so the owners can get their personal groceries written off as business expenses, and how to make pachinko machine earnings disappear before they can be accounted and declared as income. But inversely, the film also methodically explains how each of these schemes can be detected and foiled by someone as brilliant and tenacious as Itakura. (Pro-tip: always check that the bills you smuggle out of your pachinko parlor aren’t marked…)

But for all the film’s love of process, it fumbles the handling of its characters. Itakura’s characterization fluctuates from scene to scene from bumbling do-gooder in over her head to fearless eighth-dimensional chess playing schemer. Likewise, the film does little to earn our sympathy for her despite her heroics in taking down Gondō because it makes a point of showing her to be downright sociopathic in her treatment of hardworking non-criminals who make simple accounting mistakes with their taxes. The film also attempts a recognition of mutual respect between Itakura and Gondō like they were Al Pacino and Robert De Niro in Michael Mann’s Heat (1995), but it never really works.
Posted by Steve Kopian at May 20, 2020