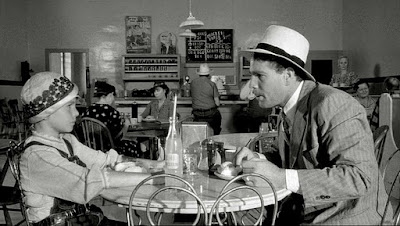 In some circles, Peter Bogdanovich gets dismissed as a mere pastiche artist. Indeed, the one-time MoMA projectionist-turned-filmmaker always wore his influences on his sleeve more proudly than most (excepting perhaps Brian De Palma). Watching his movies, one can feel the fingerprints of Orson Welles, John Ford, Howard Hawks, and more, leading one to wonder just where their influence ended and his own artistic input began.

But if Bogdanovich’s early successes can all be seen as love letters to his cinematic predecessors, his 1973 film Paper Moon defies such comparisons. Not, though, in László Kovács' black-and-white cinematography—its austere sense of place and understated yet unmissable camera movements suggest Ford. And not in the macho posturing of its tough-as-nails women—the girls all seem to channel the straight-shooting women of Hawks. Instead, Paper Moon features one thing none of those canon directors had: a nine-year-old Tatum O’Neal. Little O’Neal leaves a continent-sized impact crater in the center of the film, delivering an instantly iconic performance none have been able to replicate. (The closest is probably the impetuous, headstrong John Adames in John Cassavetes’ Gloria [1980], but his character eventually crumbles under the story’s pressure while adversity only makes O’Neal’s stronger.)

Consider her first major scene. After a series of misunderstandings, con man Moses Pray (Ryan O’Neal) ends up transporting the recently orphaned Addie Loggins to her aunt’s home in Missouri, stopping by a grain mill to extort $200 from the brother of the man who accidentally killed Addie’s mother. Incensed that he took “her” money (after all, it was her mother who was killed, not Moses’s), she demands the $200 while stopping for lunch at a diner. With each defiant yell of “I want my two hundred dollars” we grow more and more shocked, impressed, and then enamored with the young spitfire. The counterintuitive key to appreciating O’Neal’s performance is to acknowledge that it’s actually a little flat. Never having acted before, she doesn’t know how to do much more than glower at the camera like Clint Eastwood and raise her voice—usually her real-life father Ryan gets stuck with the emotional heavy-lifting in their scenes together. Yet it works so perfectly within the context of the story that anything more traditionally expressive would’ve felt forced or counterfeited. It’s the perfect performance for a near pitch-perfect film.
Posted by Steve Kopian at May 18, 2020