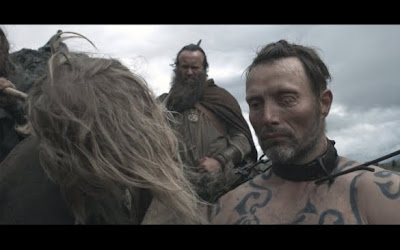 I've heard this described as a tone poem and I think that's the best way to do so. Its a near dialog-less mediation on man, god, good evil and the afterlife or its just a brutal story of a viking prisoner who escapes his captors only to take up with a band of Christians heading for the Holy Land, however the forces of nature have another plan for them and they end up in what appears to be the New World.

Graphically violent this is a film that works best when it connects with you on a subconscious and visceral level. I find that I don't intellectually get the film or perhaps even like the film, but on a basic instinct beyond words I'm drawn to this films story. I like that it operates on a plane that movies don't usually touch, that of the gut or the pure instinct.

Its a beautiful film that reminds me of Bergman, Tarkovsky and other great masters, but at the same time this is a film that is completely its own unique animal.

I know some people don't like it. I know some say it doesn't make sense and that its reaching for something it never achieves, and to be perfectly honest I can relate to that. But at the same time the film works for me in a way I can't explain.Honestly I can tell you why the film isn't good, but at the same time the film kicks me to the curb and makes me feel something that is beyond good and bad.

Worth a look for anyone who wants a head trip film and doesn't mind graphic violence and spilling viscera.
Posted by Steve Kopian at May 30, 2020