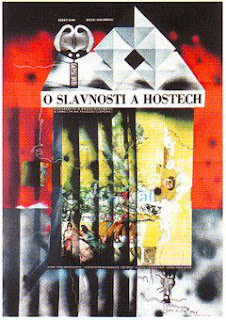 Perhaps the most famous movie scheduled for competition at the ill-fated 1968 Cannes Film Festival was Miloš Forman’s absurdist parable The Firemen’s Ball. Remembered as a touchstone of the Czechoslovak New Wave, it skewered the country’s Communist authorities with a highly allegorical story of a small town volunteer fire department trying and failing to throw an annual ball, raffle, and beauty pageant. But curiously, it wasn’t the only Czech film in competition that year that hid withering criticisms of authoritarian regimes within surrealist allegory. The other was Jan Němec’s A Report on the Party and the Guests, a film which countered Forman’s smirking cynicism with defiant anger.

The film centers on seven urban socialites picnicking in the countryside. In the middle of their revels, they’re shanghaied by a group of thugs who force them to stand in a circle drawn in the dirt and be interrogated by a cruel, mentally unbalanced man-child named Rudolf (Jan Klusák). When one of the seven gets fed up and steps outside the circle he’s swiftly captured and beaten. Properly chastened, the group is rescued by an unnamed host (Ivan Vyskočil) who shepherds them to his daughter’s wedding party at a nearby lake which is also serving as his birthday celebration. Once there, the seven vacationers endure even more bizarre behavior as the host’s violent mood swings cause him to snap at imagined slights. Eventually the seven notice that one of their party has fled, and when the host leads the other guests off into the woods to hunt him down with dogs they try their best to ignore their former friend’s fate.

Němec was extremely careful to avoid any overt political finger-pointing, and as such the film contains almost no one-to-one symbolism. (The closest he came was casting Vyskočil—who looked suspiciously like Lenin—as the host. The Rudolf character who’s revealed to be the host’s adopted son could also stand in for any number of spoiled Communist scions like Vasily Stalin.) Nevertheless, the film was banned by Czechoslovak authorities and Němec forced to flee the country. Unlike Forman, Němec was never able to translate his talents into Hollywood success, so his reputation—and his films—never reached the same heights as his fellow Czech. And though Report doesn’t match the comedic brilliance and audaciousness of The Firemen’s Ball, it remains an important piece of Communist-era Czechoslovak filmmaking.
Posted by Steve Kopian at May 30, 2020