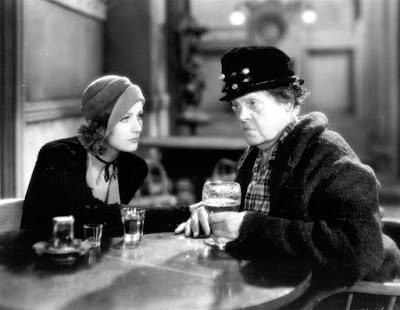 “Garbo Talks!” the advertisements screeched for Clarence Brown’s Anna Christie. For the first time audiences would be able to hear the shimmering Swedish icon’s voice for themselves. And talk she did. And talk talk talkity-talk. In a spectacular bit of cinematic overkill, her first speaking role was an adaptation of a Eugene O’Neill play, the patron saint of long-winded playwrights. It’s sorta like if a young dancer was made to share her first onscreen performance opposite Fred Astaire. But Garbo more than rose to the challenge, delivering a scorching performance as Anna, a former prostitute who travels from Minnesota to New York City to live with her estranged father Chris (George F. Marion).

The Garbo persona was infamous for its proximity to tragedy, but here we see a woman broken not by traditional melodrama but naturalistic working class drudgery and despair. Consider her first scene where she stumbles into a bar and strikes up a conversation with Marthy (Marie Dressler), a “tramp” whose been living on her father’s barge. Anna remarks that in Marthy she sees herself in forty years, and watching her suck cigarettes with the same intensity that Marthy guzzles her lager and ale, we believe her. The second half of the film sees her sailing with Chris and falling in love with Matt (Charles Bickford), a lost sailor they rescue one night. It’s here we see the same melodramatic machinations one would expect of a Garbo film: Anna finds a modicum of happiness with her new life only for it to be shattered when she’s forced to reveal her past as a brothel girl to Chris and Matt. The third act’s dominated by an excoriating monologue where she savages the two men for their hypocrisy for judging her, and one wonders if it was this scene alone that convinced Metro-Goldwyn-Mayer to pick the project for her.

But despite O’Neill’s brilliant character work, Garbo’s performance, and some eerily moody cinematography from William H. Daniels (the dockside scenes look ripped from an early von Sternberg), the film’s a flat, inert affair. It was always going to be tricky to adapt O’Neill’s wordy drama for an off-stage visual medium, but Brown’s insistence on flat tableaux compositions drains the film of its momentum and energy. The first thirty minutes where we watch the main characters chatter and get blotto are particularly mind-numbing in their stasis.
Posted by Steve Kopian at May 16, 2020