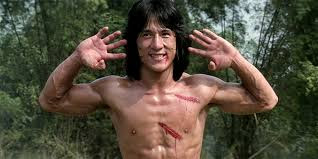 Jackie Chan’s directorial debut The Fearless Hyena marked an early high point in his career, perfecting everything he’d learned working with Yuen Woo-ping on their two groundbreaking kung fu comedies in 1978: fast-paced, frenetic fights, character-driven pathos, and an irreverent sense of humor. Though his onscreen persona would eventually morph into that of the harried everyman, in his early comedies Chan’s characters were frequently immature ragamuffins who had discipline (literally) beaten into them.

The Fearless Hyena is no exception. Chan plays Ching Hing-lung, a kung fu prodigy living with his cantankerous grandfather in the mountains. Disobeying his orders to keep their skills secret, Ching joins a kung fu school in a nearby village where he quickly gets rich challenging opponents from other schools. But the attention draws the notice of his grandfather’s evil rival Yam Tin-fa (Yam Sai-kwoon) who tracks down and kills the old man. Enraged, Ching becomes the student of the Eight-Legged Unicorn (Chan Wai-lau), an elusive master who teaches him secret techniques with which to get his revenge. The plot is paper-thin even by kung fu standards, and it almost snaps in the second act when it devolves into a series of one-on-one brawls where Ching defeats a number of enemies by alternatively pretending to be retarded and a flirty young woman. But as showcases for Chan’s talents as a fighter they’re nearly unsurpassed. The more light-hearted fights like an early tussle between Ching and three street hustlers vibrate with the wacko logic of Looney Tunes: the camera literally shakes when Chan flips a fat guy onto the ground, leaving a second fighter pancaked in the mud like he was Wile E. Coyote. But the more serious fights involving Yam are shockingly gruesome, like the opening scene where he nearly tears a man’s shoulder blades off his back with his bare hands.

Through it all Chan demonstrates his tireless perfectionism, creating fights so intricately choreographed and rehearsed they’re almost too fast to follow. Case in point: one fight sees Ching square off with a sword-wielding opponent with nothing but an iron bar. At some point Chan disarms his opponent and begins fighting with both bar and sword without missing a beat. Neither myself nor my roommate watching with me knew when the switch happened. It was simply done too fast, too smoothly, too perfectly.
Posted by Steve Kopian at May 12, 2020