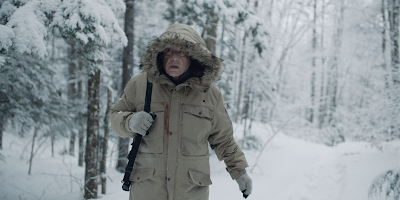 Tom Berenger plays a man living in the wild and wooly northern most part of Maine. Largely uninhabited with unpaved roads and few amenities, the people living there have to rely on anture and each other for survival. Berenger lives in a camper on the back of his pick up truck and travels around from day to day. Not long after a local casino is robbed Berenger kills one of the robbers. He hides the money but things get dicey when people come looking for him.

Call it Northern Noir, this is a nice modern day updating of a typical noir. Filled with the expected twits and turns, as well as a few you don't BLOOD AND  MONEY grabs us and drags us along as it all spirals out of control.

While the film could be considered slow, our interest never wanes thanks to Berener's world weary performance. He's been through the wars and we feel his pain, and his emotions as life drifts farther and farther from him. He is matched by a killer cast who play everything absolutely perfectly.

I was hooked early and could not look away until the bitter end.