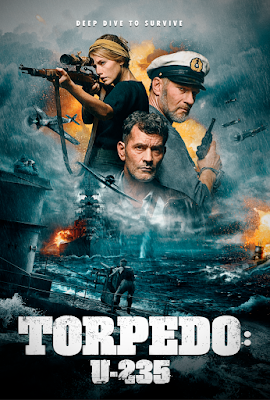 A crazy band of rogue partisans operating in Belgium are recruited to be trained and take a captured German submarine from Africa to the US. It does not go smoothly.

Enjoyable WW2 drama is nicely unpredictable even if the setting is one we've seen before. The whys and hows of the portion set in Europe promises a great time, even if it isn't entirely believable. It's a kind of modern day sensibility mashed with a typical WW2 action film that allows for some great action and funny lines.

Once the mission is set in motion things largely track as you would expect in a war time sub film with the German's hunting the sub having been tipped off in advance, and the under trained crew having to fight like hell to survive.  While we have been here before the turns within the familiar framework keep us watching since things don't entirely go as planned and we can't really guess ho will live or die.

While I didn't expect the greatest thing since sliced bread I still was surprised by how much I liked the film. Score one for having characters we love and a writer and director who know how to bend a familar story into an edge of your seat thrill ride.

Recommended for a rainy Sunday (or any quarantine day) at home.
Posted by Steve Kopian at May 17, 2020