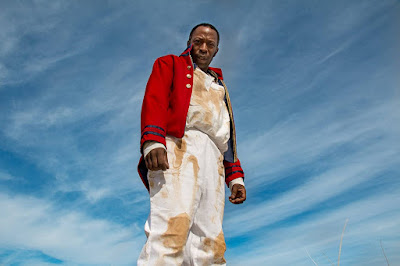 The story of African American actor Charles Gilpin who was chosen by Eugene O'Neill to play the lead in his play the Emperor Jones. The film highlights Gilpin's life, his battle with O'Neill about the language of the play and how he played the role for years after the triumphant Broadway run.

A low key and not flashy film, THE BLACK EMPEROR OF BROADWAY is a small gem of a film. It is a film which highlights not only the writing of a classic of the American stage, but more importantly it throws light on the man who made it possible by unleashing all the power within the words Charles Gilpin. Hile I had read of Gilpin's legendary performances, I had never really been told anything about him beyond that. This film gives us a sense of the man himself.

That the film works as well as it does is due entirely to Shaun Parkes as Gilpin.  Parkes gives an amazing performance from the opening scene where his soul is being crushed doing a minstrel show and being told he'll never get beyond that; onward through small quiet moments with his wife and on to the moments where he takes the legitimate stage and speaks with an intensity that makes you "oh my god..." It's a good enough performance that if this were a bigger film with money behind it Parkes might have a shot at an Oscar nomination. If that doesn't happen let us hope that the film gets him noticed and he can start taking leads in big budget films where he can rock the house or the pillars of heaven/

If there is any problem with the film it is that you can feel the origins as a stage play. While director Arthur Egeli and writer Ian Bowater do a good job of opening up Adrienne Earle Pender's play some of the scenes have seem to be a bit too static as if they were moved directly over from the play.

Quibbles aside, THE BLACK EMPEROR OF BROADWAY is  solid on so many levels that it is recommended when it plays the Brooklyn Film Festival.
Posted by Steve Kopian at May 27, 2020