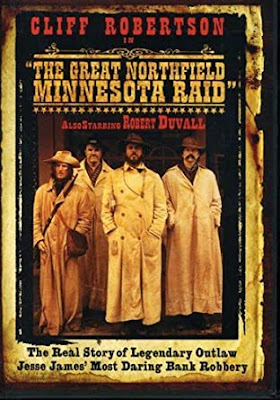 When Jesse James isn’t depicted in movies as the Old West’s answer to Robin Hood or as a generic, larger-than-life do-gooder (like that time he was played by Roy Rogers—don’t ask), the infamous outlaw is usually considered within two contexts. The first is within larger hagiographies that frame the West as the source of American legends. In these we get the romantic retellings of the Jesse James myth charting his rise and fall as a misunderstood bandit whose circumstances trapped him on the wrong side of the law. The second are revisionist reconsiderations depicting him as a cunning, sociopathic career criminal, usually focusing on his murder at the hands of Robert Ford.

But Philip Kaufman’s The Great Northfield Minnesota Raid fits into neither of these categories, choosing instead to focus on one specific incident in Jesse James’ life: the James-Younger Gang’s disastrous attempted robbery of the First National Bank of Northfield, Minnesota in 1876. This marked the end of James’ gang with only himself and his brother Frank escaping while the rest of their posse were killed or arrested. Kaufman treats the event as the end of the Old West era, a watershed moment where the age of cowboys and Indians gave way to civilization. Kaufman personifies these twin historical trends with his competing leads, the first being Jesse (Robert Duvall) and Frank (John Pearce), depicted as cutthroats tied to old ways and manners, eager to feed their legend as magnanimous thieves so long as it provides them with safe houses among impoverished settlers and homesteaders. On the other side is Cole Younger (Cliff Robertson), no less astute a criminal than Jesse but more attuned to the changing trends of progress around him, taking the time to scout out Northfield and marvel at its new technology like steam engines.

But the film is far from elegiac. In fact, Kaufman presents his material with a comedic breeziness at considerable odds with its grim, grimy visual aesthetic. At times it feels like Kaufman is trying to channel George Roy Hill’s Butch Cassidy and the Sundance Kid (1969)—indeed, an extended slapstick sequence at a baseball game feels like a direct response to that film’s scene where Paul Newman does bicycle tricks to the sound of “Raindrops Keep Fallin’ on My Head.” But Kaufman never manages to fully reconcile the comedy with the seriousness of the historical material.
Posted by Steve Kopian at May 26, 2020