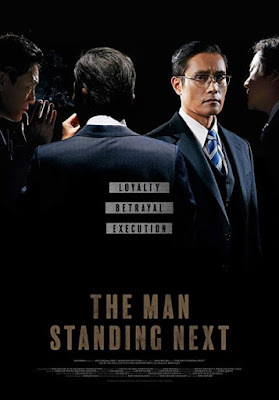 A fictionalized look of the events that transpired in the 40 days leading up to the assassination of Korean President Park in October 1979 by Kim Gyu-pyeong, one of the directors of the KCIA the Korean Intelligence Service. The film has Lee Byung-hun as Kim going to the US to stop his predecessor from selling his memoirs and telling the Americans what is going on in Korea. Kim gets th memoirs, but also his eyes opened as he is told about all the dirty laundry of President Park. This sets things in motion that eventually lead to the shooting.

I am kind of unsure how to react to THE MAN STANDING NEXT. On it's own it is a solid political drama or thriller that ends in a political assassination. I had a really good time watching it but often felt a bit lost. I  didn't have a firm handle on the actual events, with my memories of Koreagate being a tad vague despite following it when it was going down. I had the sense that had I better handle on the history I would have liked it more.

When I finished the film I went back and read about the actual events. While I didn't grasp everything, knowing about how Park came to power, the steps he took to remain in power and all of the events in the decade prior to the killing put things in a new light. I appreciated the the film more because I understood the reference to what was happening and had happened.  I think knowing Korean history makes it a better film. It also explains why this was is one of Korea's top films at the box office this year.

However even not knowing all the details this is a solid thriller. Its an edge of your seat tale that makes you wonder what is going to happen next.