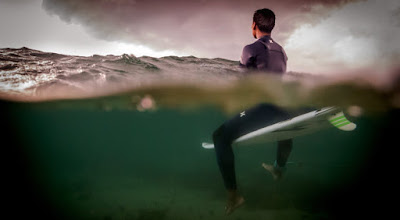 One of the great tragedies of the Brooklyn Film Festival being virtual is that people won't see INTO THE STORM on a big screen. This portrait of  Jhonny, a young man from Peru finding a way out of poverty through surfing has some stunning images. It is also a hell of a film.

If you've been reading Unseen Films for any amount of times you are aware that I have a passion for great surfing films. Going all the way back to the first weeks of the site Unseen has highlighted somes great (nd not so great) surfing films. If one is playing a fest I will review it. When I saw INTO THE STORM was playing Brooklyn I jumped at the chance to see it.

Walking the line between a  portrait of a surfer and a look at the society into which he was born, the film wonderfully manages to be firing on several levels. The film never lets one thread overwhelm the other with the result we are always fully aware of the forces acting on Jhonny, especially in the middle section that concerns a drive by shooting. This isn't your typical surfer dude touring around tale but something much more complex. There are literal life and death stakes.  As a result the film moves us on a much deeper level than most other surfing films because it is more than just pretty pictures but the portrait of a young man trying to just stay alive.

Speaking of pretty pictures INTO THE STORM has some of the best images of surfing I've run across. I have no idea how they got some of the but I was blown away. I don't know of any other surfing films that look this good.  The cinematography is so incredible that you don't notice or care about the frequent use of drones.

INTO THE STORM is a great film. Easily one of the best films at the Brooklyn Film Festival it will make you think and feel and want to see it again.
Posted by Steve Kopian at May 27, 2020