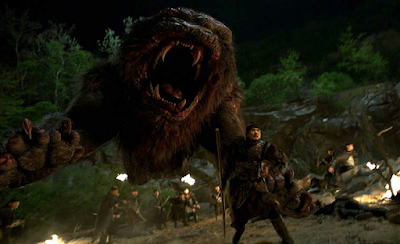 Heo Jong-ho’s Monstrum is a film that wears many hats—or, er, many gats. On the one hand it attempts to be a lavish historical epic that elevates the iconography of the sixteenth century Joseon period to the same levels of splendor as ancient China and Japan. In South Korea’s continuing bid for Southeast Asian cultural superiority, it only makes sense that they’d want to make ancient Korea as iconic and instantly recognizable as China’s Forbidden City and imperial court or Japan’s august shiro and indomitable samurai. The film’s also a kaiju movie, centering on a giant monster known as “Monstrum” that lives on Mount Inwangsan near the capital city. The creature ravishes the countryside, destroying whole villages and infecting the survivors with plague. Looking like a pustule-ridden shisa with gorilla arms, Monstrum is a terrifying, agile, and indestructible beastie.

Meanwhile, the film also features Game of Thrones style realpolitik scheming, frequently focusing on the inner machinations of the Joseon court and the Prime Minister’s ruthless Machiavellian scheming to undermine and overthrown the emperor. In the midst of all this, the film’s also a family survival drama reminiscent of Roland Emmerich’s disaster movies, following disgraced former general Yun Kyum (Kum Myung-min) as he’s summoned by Emperor Jungjong (Park Hee-soon) to hunt down Monstrum. He takes with him his doltish but devoted second-in-command Sung Han (Kim In-kwon) and his headstrong adopted daughter Myung (Lee Hye-ri), both of whom get their own subplots and characters arcs. And finally, Monstrum tries to be a big-budget action movie, combining traditional creature feature destruction with wuxia-flavored Korean martial arts fights.

Does it all work?

Not particularly. For in addition to everything previously mentioned, the film also tries to be an allegory. Who are the real monsters, it asks, the shisa-gorilla or the scheming, despotic politicians (who for the first half of the movie are implied as having invented Monstrum as an urban legend to help discredit Jungjong)? The answer, of course, is that the giant monster is the real monster, rendering all its metaphors about the dangers of unchecked political ambition moot. The film has serious structural issues, too, with a third act that goes on and on and on. Still, if Monstrum is a mess it’s an admirable one, the product of too much ambition, not a bottom-line driven lack of it.
Posted by Steve Kopian at May 22, 2020