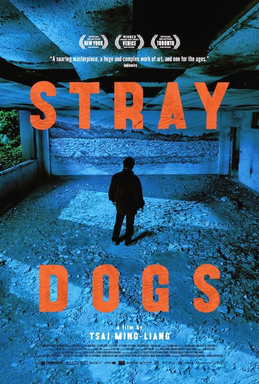 Is Stray Dogs one of Tsai Ming-liang’s most uncompromising, inaccessible outings?

The film certainly seems a defiant distillation of things traditional audiences would find off-putting or tedious. Eschewing traditional narrative storytelling, the film is mostly comprised of vignettes of a homeless family scrounging to survive in Taipei. During the day the father (Lee Kang-sheng) earns food (and booze) money by acting as a living real estate billboard next to a busy intersection while his son Yi-cheng (Lee Yi-cheng) and daughter Yi-chieh (Lee Yi-chieh) explore the city’s skeleton.

Filmed mostly in static long takes, these vignettes need not be interpreted as happening in chronological order; indeed, they can be interpreted as an almost Cubist dissection of urban poverty, examining individual moments in time as disparate rays of light from a prism. Equal time, weight, and consideration are given to shots of urinating and defecting as scenes of eating or sleeping. The film strives to make its audience experience life as its characters do, so disassociated from society that they merge with the landscape. It’s only in the last act when anything approaching a “plot” arises when a sympathetic grocery store cashier (simultaneously played by three different actresses in a head-scratching Buñuelian flourish) adopts the family, moving with them into an abandoned mansion that seems to have weathered an apocalypse. Not that her presence has much effect on the family—they continue to exist largely as they did before, trapped in a prison of their own despair. Returning to what I asked before, if Stray Dogs isn’t Ming-Jiang’s most inaccessible film, then it’s perhaps his most audience hostile. We see here none of the youthful rebellion of Rebels of the Neon God (1992), the musical reprieves of The Hole (1998), or the shock humor of The Wayward Cloud (2005). It’s two hours of mind-numbing hopelessness, emphasis on “mind-numbing.”

Even as a defender of Ming-liang’s work, I find nothing in Stray Dogs to redeem its ludicrous pretentiousness. I remember the scene that lost me: the father pantomimes smothering a life-sized mother doll made by his children, eats its lettuce head, and bursts into tears. Because urban ennui, I guess? And no, that last thirteen-and-a-half minute static shot of the father and the woman staring at a painting without moving or talking? It wasn’t brilliant. It was punishment.
Posted by Steve Kopian at May 17, 2020