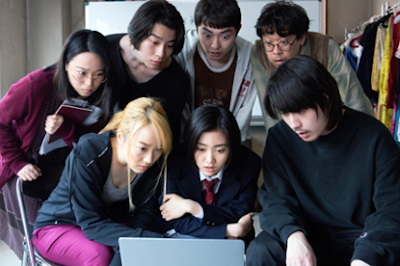 NEW YORK, May 22, 2020–In light of the ongoing international situation with COVID-19, the organizers behind JAPAN CUTS: Festival of New Japanese Film have decided to take this popular annual event at Japan Society out of its usual form and craft a completely online version of the festival. Partnering with Festival Scope and Shift72 as the streaming platform and technology service, the festival team is hand-crafting 14 days of unique screening opportunities for Japanese cinema lovers, serving the Society’s dedicated audiences in New York City but also, for the first time, making the festival available to viewers throughout the United States.

“While nothing can replace the thrill of welcoming filmmakers and audience members together into our auditorium, we are excited by the new possibilities opened up by putting the festival online this summer,” says K. F. Watanabe, Deputy Director of Film at Japan Society. “Our programming team is committed to maintaining the high quality of film offerings and intimate feeling of community provided by JAPAN CUTS within this reimagined format while also finding ways of engaging new audiences across the country and supporting Japanese film culture.”

Set for July 17-30, the online edition of the festival will offer a diverse slate of around 30 feature films and shorts programs on a VOD model, with a limited number of virtual tickets and access geoblocked to the U.S. Recurring thematic festival sections such as Documentary Focus and Experimental Spotlight will return, and a new competitive section dedicated to early-career independent filmmakers will be introduced. In addition, live and pre-recorded virtual Q&As, discussion panels, and video greetings from filmmakers and programmers will round out the dynamic and interactive program.

A live virtual Q&A will be scheduled and hosted on the festival’s opening day, July 17, with Shinichiro Ueda, director of the JAPAN CUTS 2020 Opening Film selection Special Actors. The filmmaker is best known for his breakout 2017 indie debut One Cut of the Dead, a low-budget zombie film written and directed by Ueda that was an unexpected box office hit in Japan—where it screened across 340 theaters and surpassed 2 million admissions from word of mouth—and an international festival sensation. Special Actors is Ueda’s much-anticipated follow-up feature, an ensemble comedy about an oddball acting troupe infiltrating a cult, which had its theatrical run in Japan in late 2019. The film has not yet screened in North America and will make its online streaming debut with JAPAN CUTS courtesy of international rights holder Shochiku.

“I am honored to have my film selected as the opening film [for JAPAN CUTS] among the many others included in the festival,” wrote Ueda through email. “Though we are in a situation where it is difficult to travel, I am happy that at least this film can travel and reach people overseas in North America. Unpredictable twists and turns await you in this film, but try not to faint like the main character—and please enjoy this fun movie journey!”

The full lineup of JAPAN CUTS 2020 films and panels will be released in late June.

Emphasizing the diversity and vitality of one of the most exciting world cinemas, JAPAN CUTS gives cinephiles their first (and sometimes only) chance to discover the next waves of filmmaking from Japan. Founded in 2007, the festival presents the biggest Japanese blockbusters, raucous genre flicks, peerless independents, arthouse gems, radical documentaries, and avant-garde forms, along with unique collaborative programs, workshops, and panels put together with the cooperation of other international organizations. Special guest actors and filmmakers join the festivities for Q&As, award ceremonies, and the post-screening parties and receptions audiences have come to expect, with live music, food, and drinks. 2020 is the first year that JAPAN CUTS will not be physically hosted at Japan Society since its inception.

Founded in 1907, Japan Society in New York City presents sophisticated, topical and accessible experiences of Japanese art and culture, and facilitates the exchange of ideas, knowledge and innovation between the U.S. and Japan. More than 200 events annually encompass world-class exhibitions, dynamic classical and cutting-edge contemporary performing arts, film premieres and retrospectives, workshops and demonstrations, tastings, family activities, language classes, and a range of high-profile talks and expert panels that present open, critical dialogue on issues of vital importance to the U.S., Japan and East Asia. Japan Society is located at 333 East 47th Street between First and Second avenues (accessible by the 4/5/6 and 7 subway at Grand Central or the E and M subway at Lexington Avenue). www.japansociety.org